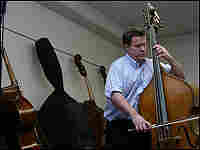 From 'Edgar Meyer,' the CD

Edgar Meyer has been hailed as a virtuoso, an original, a genius. The 45-year-old musician and composer has been a bass player for as long as he can remember.

But on a new recording he plays more than just bass. Much more. He plays each and every instrument featured on the self-titled CD -- from the banjo to the mandolin.

And despite a busy schedule, he also still makes time to teach aspiring musicians at the Curtis Institute of Music in Philadelphia. A visit to one of Meyer's classes at the school -- an ornate 19th-century mansion off Rittenhouse Square -- shows the master at work as an educator.