Accessibility links
Turning Dirty Coal into Clean Energy Today's expensive gasoline is making people look for alternatives. That has opened doors of opportunity for entrepreneurs like Andrew Perlman, who is betting that the newest fuel will be made from one of humanity's oldest: coal. 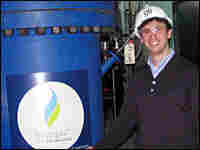 Andrew Perlman shows off the gasifier his company is going to use to show it can turn coal into natural gas or methane at less than half the cost of other technologies. They call their product bluegas. Elizabeth Shogren, NPR hide caption

Scroll down to read about other clean coal technologies. 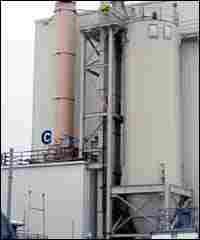 GreatPoint is trying to prove it can make natural gas out of cheap, abundant coal at this test plant outside Chicago's O'Hare Airport. Elizabeth Shogren, NPR hide caption

Today's expensive gasoline is making people look for alternatives. That has opened doors of opportunity for entrepreneurs such as Andrew Perlman, who is betting that the "clean" fuel of future will be made from one of humanity's oldest -- and dirtiest: coal.

During the energy crisis of the 1970s, the U.S. government promoted research projects to produce gas and liquid fuel from coal. But those efforts were abandoned after the crisis passed. Now, instability in the Middle East and record-high prices for petroleum products have prompted a new wave of interest in technologies to turn coal into natural gas and liquid fuel. For entrepreneurs such as Perlman, these technologies hold the promise of producing cleaner fuel out of coal, which is abundant and affordable.

"The U.S. has more coal than any other country in the world. It's actually about as cheap as dirt," said Perlman, co-founder and CEO of Greatpoint Energy, a Cambridge, Mass.-based company.

GreatPoint Energy is refining a process called catalytic gasification to convert coal into methane or substitute natural gas. In their process, coal is mixed with a catalyst and fed into a gasifier: a tall, narrow, metal cylindrical container.

Inside the gasifier, the coal and the catalyst are combined with steam and subjected to pressure. That causes a chemical reaction that converts them into carbon monoxide and hydrogen. GreatPoint says the key to its new technology is the catalyst it uses. Perlman says it's a combination of readily available metals, but so far, the ingredients are secret.

Because of that catalyst, GreatPoint's process works at a lower temperature than other technologies, which makes the process much cheaper. The catalyst also enables GreatPoint to separate out about half of the carbon dioxide, a chief cause of climate change. (The company plans to sell that carbon dioxide to be injected into oil or gas wells to facilitate production.) Other pollutants also are removed at the plant, which makes the product much cleaner than the synthesis gas produced by other gasification processes.

Greatpoint's technology works in the laboratory. Sometime this summer, the company will learn whether it also will work at a small-scale plant in Des Plains, Ill. 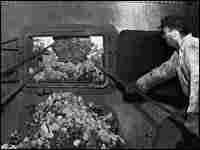 Coal has long been a popular, cheap and abundant source of energy -- but it's also dirty. Several companies are working on new technologies to change that. Hulton-Deutsch Collection/Corbis hide caption

Gasification is crucial to a number of other efforts under way to develop plants that produce clean energy from coal:

The Department of Energy is using coal gasification as the basis of its effort to build an emissions-free power plant. As envisioned, its so-called FutureGen project would produce electricity and hydrogen from coal and capture the carbon dioxide that would be generated in the process.

Rentech Inc., based in Denver, is one of the companies trying to turn coal into low-polluting liquid fuel. Their technology is based on the Fischer-Tropsch process, named after the German researchers, Franz Fischer and Hans Tropsch. They invented the process in the 1920s, when Germany lacked petroleum reserves but had plenty of coal.

With the Fischer-Tropsch process, you start with coal or another carbon-based resource and put it in a gasifier. You take the resulting gas, known as syngas -- a mixture of hydrogen and carbon monoxide -- and put it into another reactor. In the reactor, the gases are combined with a solid catalyst such as iron or cobalt. A chemical reaction takes place to convert them into hydrocarbons, which later cool to form liquid fuel.

The process was used by Nazi Germany and Japan during World War II. When apartheid was the law of the land in South Africa, the country was subject to an international petroleum embargo. To compensate, South Africa developed Fischer-Tropsch operations, which are still in use today.

Rentech's process uses an iron-based catalyst, which the company says improves on existing technology. According to Rentech's Web site, its process results in fuel that burns very cleanly because it is low in sulfur, particulates and aromatics. It can be adapted to be used for a variety of purposes, including jet fuel. Rentech's Web site states that the company is currently building a small pilot plant in Commerce City, Co., outside of Denver.

Several other companies and the states of Pennsylvania and Montana are engaged in their own projects to create liquid fuel out of coal.