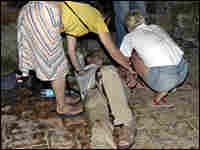 Egyptian authorities report that at least three explosions struck the Red Sea resort city of Dahab on Monday night. The precise number of casualties remains unknown, but officials say at least 22 people have been killed, and 150 wounded.

The explosions occurred in the center part of Dahab, which is on the Sinai Peninsula along the Gulf of Aqaba. Egyptian President Hosni Mubarak has called the explosions a terrorist act, according to the state news agency. President Bush has denounced the explosions, calling them a "heinous act against innocent civilians."

There have been other bombings at Egyptian resorts in the past two years. In July of 2005, 64 people died at Sharm el Sheik, a resort favored by Israelis. And in October of 2004, attacks at Ras Shitan and Taba killed 34 people.