Accessibility links
'$64 Tomato': A Quest for the Perfect Garden Like many aspiring gardeners, William Alexander wondered what it would be like to be able to wander out into the yard, and pluck a ripe, juicy tomato from the vine anytime he wanted. In a new book, he explores the true costs — and joys — of working one's own soil.

Listen
'$64 Tomato': A Quest for the Perfect Garden 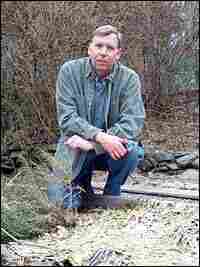 Like many aspiring gardeners, William Alexander wondered what it would be like to be able to wander out into the yard, smell the flowers and perhaps pluck a ripe, juicy tomato from the vine anytime he wanted. In a new book, The $64 Tomato, he explores the true costs -- and joys -- of working one's own soil.

In an excerpt from the book, Alexander describes a ritual he and his daughter share when harvesting potatoes.

A persistent groundhog took a charge and kept on going into the garden.

The book's title comes from the sum Alexander figured it cost him to produce each one of his heirloom tomatoes. (The subtitle is "How One Man Nearly Lost His Sanity, Spent a Fortune, and Endured an Existential Crisis in the Quest for the Perfect Garden.")

But for Alexander, "it's not about what it actually costs to eat this piece of fruit. It's really about lifestyle. And the garden really for us was a kind of family member, for better or for worse."

"I still love to garden," he says. "On a good day, with the sun shining and the soil warmer than the air, knowing that that the best BLT in the world is a couple of weeks or months away, it seems like every dollar, every fight with a contractor and a deer was worth it." 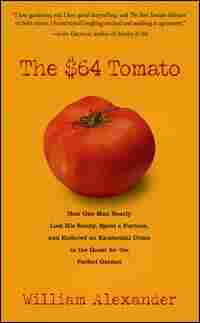 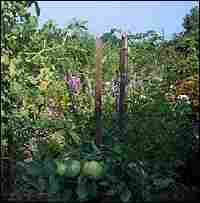 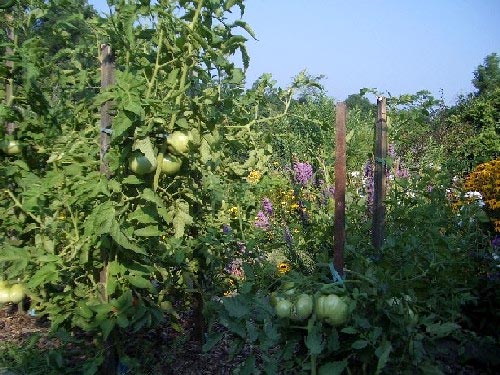 We will gladly send the management a jar of
our wife's green-tomato pickle from last summer's crop -- dark green, spicy,
delicious, costlier than pearls when you consider the overhead.

Summer, like my tomatoes, was showing its cracks. A pre-back-to-school hush filled the school yards. The late-August nights were delightfully cooler, the days noticeably shorter, the afternoon shadows more angular. I watched a single rust-colored leaf blow across the garden the other day, a startling reminder of the passage of seasons, a hint of the winter to come.

But I still had tomatoes. Sweet, juicy heirloom tomatoes. I was in the garden, having just picked one of the few remaining Brandywines, when Anne came by and exclaimed, "What a beautiful tomato!"

"It should be," I joked lamely. "It probably cost us twenty dollars."

Anne looked at me, waiting for an explanation.

"We hardly got any," I said. "And we spent a lot on the garden this year."

"Surely you're exaggerating," Anne insisted, used to my hyperbole. I conceded that twenty dollars for one tomato was probably a gross exaggeration. But the exchange got me thinking.

Most of the gardeners I know don't garden to save money on groceries, although that might have been the norm a hundred years ago, when the backyard vegetable patch was a staple of most American homes. Most gardeners today garden because they enjoy the activity, or crave the freshness, or want vegetables, such as Brandywine tomatoes, that cannot be bought at the local Piggly Wiggly. Nevertheless it is reasonable to assume that it is cheaper to grow your own food than to buy it. That $1.79 pack of tomato seeds has the potential to feed a small community; most of us will use a half dozen seeds and throw out the rest, or use them next year. And the rest of the materials are free. You stir a little home-brewed compost into the vegetable bed, throw the seeds in the ground, add a little water, and presto, in a few months you have tomatoes, n'est-ce pas? Your initial $1.79 investment can return, I don't know, potentially fifty, a hundred, maybe even two hundred dollars' worth of tomatoes. Try to get a return like that on Wall Street.

But that isn't the total fiscal picture. I ran into a few expenses along the way before and after the ground was ready to receive those tomato seeds. Like building a garden. Like keeping the groundhogs and deer from eating everything in sight. This year seemed especially bad. I knew I had put a lot into the garden this year and hadn't taken an awful lot out. So just for the heck of it, I decided I would try to figure out just what this "free" tomato really cost.

I started with the costs of building the garden (orchard excluded):

Labor for installation of edging $600

Chipper/shredder for shredding leaves for

Not counting thousands of dollars of my labor thrown in for free, or yearly expenditures on seeds and seedlings, I ended up with the shocking figure of $16,565. When Anne and I started the project, we put what seemed to be a generous limit of $10,000 on it, and true to the Rule of Thirty-two (any home project will take three times as long to complete and cost twice as much as planned), we ended up overbudget by 65 percent.

Of course, in doing my tomato valuation, I couldn't charge this all off against one year of gardening (only filthy-rich corporations with good tax lawyers could get away with that). Instead I amortized the cost of the garden over twenty years, by which time I would either be gardening somewhere else, not gardening, or rebuilding this garden. So to get the annual portion of the construction costs, I divided $16,565 by twenty years, yielding $828 per year. To this I added any additional expenses I incurred this year. As I have some expenses every year, I did not amortize them but charged them fully against this year's "profits":

Holy smokes! I spent another $735 on the garden this year without even realizing it!

These costs plus this year's share of the one-time construction costs totaled $1,563. Now, since I was interested in the price of my tomato, I did not count everything that came out of the garden equally. I'm not even sure how one would do that. Instead I subtracted from the $1,563 the true market value (using the higher local farm-stand prices, not supermarket prices) of all the produce I harvested excluding Brandywine tomatoes. In the spirit of full disclosure, I should point out that this year was a terrible year for gardening (for me, anyway). We had record-setting high temperatures in July and August that decimated the lettuces and tomatoes, and I hadn't grown corn this year, further reducing my total yield. I don't usually weigh my vegetables (except potatoes, for some reason) as I bring them in from the garden, but judging by how many meals we got from our crops and how many jars of pickles we made, I was pretty well able to reconstruct the amount. But to be safe, I erred on the high side. Here is our yield:

Basil and other herbs $35

Representing $344 worth of produce, excluding Brandywine tomatoes. Now, $344 isn't exactly peanuts, but "gentleman farmer"? "Self-sufficient?" Who am I kidding? Three hundred forty-four dollars' worth seems like barely enough food to nourish the groundhog, let alone a family of four. In my meager defense, let me point out again that it was a very poor year (although, mysteriously, the local farm reported a great season); in other years we might be higher, but for this year we were stuck with $344. The other thing this reveals is that food is cheap. I actually grew a fair amount of food; it just wasn't worth much. For example, my local green market is selling a ten-pound bag of white potatoes for $1.50 -- just 15¢ a pound. A person could probably eat well from that buck-fifty bag for several days. (For this exercise I valued my Yukon Gold and fingerling potatoes at $1.50 per pound.) Every time I'm done picking sugar snap peas or rise from my stoop, aching, from picking green beans, I marvel that I can buy this stuff in the green market for a dollar a pound. How can anyone possibly grow green beans for a dollar a pound? I can't even pick them for a dollar a pound, it takes so long. It's a miracle that any farmer stays in business, but God bless them.

Back to my expensive tomatoes. Three hundred forty-four dollars (the value of this year's yield) subtracted from $1,563 left a cost of $1,219 for my stash of Brandywines. How many did I get this year? At the risk of making too many excuses, I'll point out that the heat just shut down my tomato plants in August. It is a known fact that heat before blossom set will shut down tomatoes, but I'd always thought that August heat was good for tomatoes. When I asked Doris at the farm if their tomato crop was as meager as mine, she looked at me as if I were crazy. They'd had a great tomato year, but they grow Big Boy and Roma tomatoes; perhaps these varieties withstand heat better than my purebred heirlooms. Or maybe the fact that they mulch heavily kept the roots cooler and the plants more productive. Or maybe they're just better farmers than I am. After all, they've been doing it for generations.

I know, I'm stalling. So just how many tomatoes did I get this year? Exactly nineteen. The groundhog got almost as many. They were large and delicious, these nineteen Brandywines, and that number does represent a tomato a day for almost three weeks. Still, it doesn't seem like much. It isn't much.

This was sobering. I never realized how much growing my own food was costing me. I went to Anne with the numbers.

"You won't believe this," I said. "Remember that joke I made about the expensive tomato?"

"Uh-huh," she said, distracted, as she leafed through the New England Journal of Medicine.

"Twenty dollars turned out to be a tad low. That was a sixty-four-dollar tomato."

"Maybe that one you stuffed with crabmeat? That was good," she said, not looking up.

"You don't understand. I'm not talking dinner-menu prices. Every Brandywine tomato we picked this year literally cost us sixty-four dollars to grow."

Now I had her attention. She put the journal down and stared at me for what seemed an eternity.

"And just how do you know that?" she finally inquired hesitantly, not sure she really wanted to know.

I laid the spreadsheet in front of her. She studied it for a minute.

"We spent all this on the garden?"

"Maybe more. I'm sure I forgot some things."

She pushed away the paper as if it were contagious and flipped a page in her journal. "Well, we see this," she said, borrowing a phrase she often uses with patients. Meaning, in this case, that she was over the shock and ready to move on. And inviting me to join her. Truthfully I wished I hadn't done this exercise in accounting. Some things you're better off not knowing. I've said that the garden had become a family member, but at the moment it felt, not like the beloved grandmother you care for, but like the embarrassing uncle you avoid at weddings, loud and extravagant beyond his means, always in trouble, always in debt.

We see this. I, too, wanted to move on, but there was still one unspoken question troubling me, one that spanned months, years, ages. A question I both had to ask and was afraid to ask.

Anne deliberately closed the journal, placed both hands on the cover, and looked up at me.

Excerpted from The $64 Tomato copyright 2006 by William Alexander. Published by Algonquin Books. 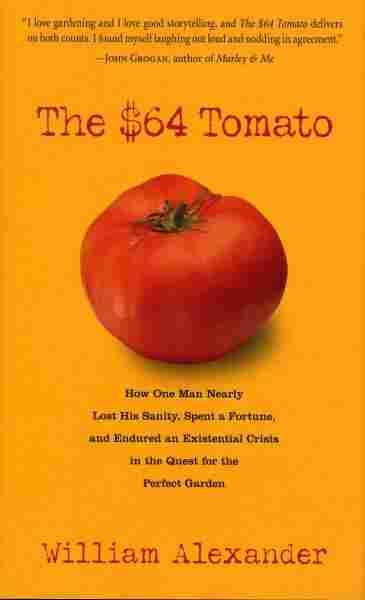