Accessibility links
Moving L.A.'s Homeless Away from Skid Row There are some ambitious plans to get many of the tens of thousands of homeless in Los Angeles County off the streets and into homes far away from the downtown area known as Skid Row. But many cities say they're already doing their part. 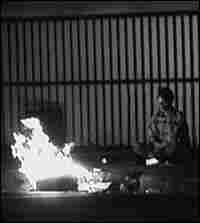 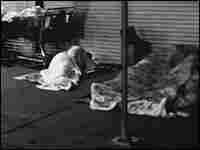 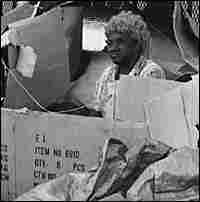 Women and children usually get priority for shelter beds, but there are never enough to house everyone. Union Rescue Mission hide caption

An estimated 90,000 people in Los Angeles County are homeless, and about 11,000 of those live downtown in an area of less than one square-mile known as Skid Row.

County and city officials recently unveiled two major plans to fight homelessness. Both call for moving people out of Skid Row -- but many of the county's far-flung communities have not put out the welcome mat.

There are many large homeless shelters in Skid Row, but the sheer need is overwhelming. At night, the sidewalks of entire city blocks in the mostly industrial areas just east of the city center are lined with tents and impromptu shelters.

But there are ambitious plans to change that. A Los Angeles city plan calls for spreading services to some of the other 87 cities in the county, at a cost of $12 billion over 10 years. Likewise, the County Board of Supervisors plans to spend $100 million right away, setting up emergency shelters away from Skid Row.

The Union Rescue Mission, the largest homeless shelter on Skid Row, has its own plans to move more than 250 women and children to a former retirement community in the hills of northern Los Angeles County -- 71 exquisitely landscaped acres now called Hope Gardens.

Andy Bales, director of the Union Rescue Mission, says the open space can itself be a healing touch. He thinks of it as a "Psalm 23 experience," where people who have been abandoned can lie down beside still waters.

Marlene Rader and her neighbors, however, are hoping to stop the plan. She says the new shelter, just a couple of miles away from her home, wouldn't be a "good fit" with the rural area.

"It's not that I'm objecting to helping people," she says. "It's too big -- they could basically house all of Skid Row up here if they chose to."

Many residents of another nearby community called Lake View Terrace, on the other hand, think it's a good plan and generally support the Hope Gardens project.