Accessibility links
Chad Struggles to End Rebellion Chad is battling a rebellion that it says neighboring Sudan is sponsoring. The rebels are attempting to end the nearly 16-year rule of Chad's president. U.S. Deputy Assistant Secretary of State Donald Yamamoto is visiting Chad this week to discuss insecurity in the central African country.

Chad is battling a rebellion that it says neighboring Sudan is sponsoring. The rebels are attempting to end the nearly 16-year rule of Chad's president. U.S. Deputy Assistant Secretary of State Donald Yamamoto is visiting Chad this week to discuss insecurity in the central African country. 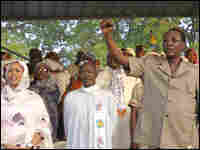 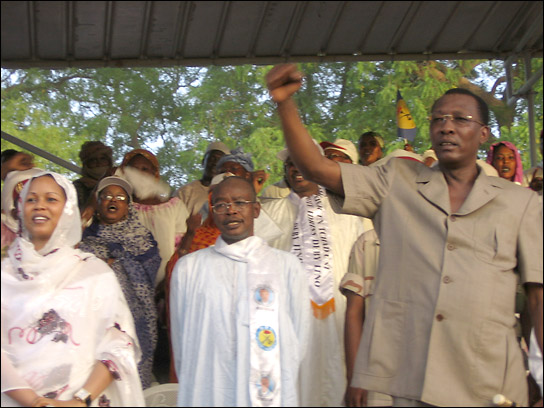 Chadian President Idriss Deby at a rally in the capital, Ndjamena, on April 22.

Photos of Life in Chad

We turn now to a small country in central Africa that's getting lots of attention. Chad is in turmoil, and that could affect its oil exports.

The U.S. tried to send in a senior America diplomat earlier this month, but after rebels attacked the capital that visit was delayed and concludes today.

Chad is battling a rebellion, it accuses neighboring Sudan of sponsoring. Its government is locked in a bitter dispute with the World Bank over how it spends its oil revenues, and the country's president is in the midst of a reelection campaign, even as the rebels have vowed to oust him before the voting next month.

Chad's beleaguered President Idriss Déby is under pressure from rebels determined to drive him out of power. But, as his supporters gather to sing his praises and shower blessings on their leader, Déby put on a brave face on the one hand, while railing against his neighbor, Sudan, on the other.

QUIST-ARCTON: The target of bitter words and repeated accusations from the Chadian president is his Sudanese counterpart and one-time ally, President Omar Hasan al-Bashir.

Idriss Déby launched his rebellion from Sudan more than 15 years ago, with al-Bashir's blessing. Now, the Sahara Desert neighbors are trading tit-for-tat accusations that each is supporting the others rebel groups.

Chad says Sudan has exported violent conflict and unrest across the border in Darfur into Chadian territory. Sudan says Idriss Déby is backing the rebels in Darfur.

Speaking after a meeting with President Déby on his first visit to Chad, the U.S. Deputy Assistant Secretary of State for African Affairs, Donald Yamamoto, says Washington wanted to ease tensions and seek peace in the region.

Mr. DONALD YAMAMOTO (Deputy Assistant Secretary of State for African Affairs): Our purpose here is to work with the people of Chad, and the government of Chad, and all the parties in Chad, for a peace stability. And the threats that you face from Sudan are very serious, and you, the people of Chad have our deep, deep, support and appreciation.

QUIST-ARCTON: Hundreds of rebel prisoners, including about a dozen children, are being kept in this cramped courtyard behind the main military police headquarters here in N'Djamena. This follows a failed, but daring, dawn raid by rebels on the Chadian capital earlier this month.

An African Union team is here at the prison as part of a fact-finding mission to investigate President Déby's claims that the rebels were sent by Sudan.

The president says he needs more military hardware to counter the rebellion, and that he wants to use Chad's oil money to buy the arms. Chad began exporting oil three years ago, but the World Bank, which underwrote the construction of the Chad Cameroon, oil pipeline, says Déby has breached an agreement on how the petroleum profits should be spent.

QUIST-ARCTON: Mahammed Hussein is the Secretary General of President Déby's Patriotic Movement for Salvation Party, which is busy preparing for elections in Chad. But Chad's main opposition parties are boycotting the presidential poll. They say electoral lists are bloated with fictitious names and that pledges on political dialogue made by President Déby have never been fulfilled.

Ibn Umar Mohammad Saleh is a Chadian opposition leader and spokesman for a coalition of 20 parties that won't be going to the polls.

Mr. EBNE OMAR MOHAMMED SALI (Chadian opposition leader): (Through translator) The problem is that President Déby is not ready for consensus with all Chadians. He changed the constitution to cling onto power and seek a third term in office. That's why some of his very close allies and relatives have taken up arms against him.

But wars and rebellions are not the answer for Chad. What we need is a political solution.

QUIST-ARCTON: N'Djamena is quiet for now, after the rebel attack. And despite the opposition boycott, Idriss Déby is pressing ahead with his election campaign in Chad.

QUIST-ARCTON: His critics warn Irdriss Déby may win the election in Chad, but must then prepare for more armed opposition to his authority.

Analysts say that once the poll is over, Chadians must sit together and talk for the sake of national unity and stability. Only genuine dialogue, they stress, will avoid the cycle of rebellion that have kept this nation impoverished and underdeveloped despite its recently found oil wealth. Ofeibea Quist-Arcton, NPR News in N'Djamena.

MONTAGNE: Just getting water is an ordeal for thousands of Chadean refugees fleeing armed groups along the border with Sudan. You can see the difficult conditions they live in at npr.org.