Accessibility links
Winter May Spell Doom for Aging Mars Rovers The approaching winter in Mars' Southern Hemisphere is going to make life tough for the two NASA rovers currently puttering around on the planet. Both rovers have lasted more than two years longer than expected, but they are also showing clear signs of age.

Tulips may be blooming in parts of the United States, but soon it will be the dead of winter in Mars' Southern Hemisphere. That's going to make life tough for the two NASA rovers currently puttering around on the planet. Both rovers have lasted more than two years longer than expected, but they are also showing clear signs of age. The extreme cold of a Martian winter could spell their doom.

Spirit and Opportunity were built to last at least 90 days. In the first days of the mission, Building 264 at NASA's Jet Propulsion Lab in Pasadena, Calif., was jammed around the clock with visiting scientists. They filled conference rooms and hovered over every bit of data coming back from the twin rovers. Each rover had its own team of scientists, meticulously planning every move the rovers made. 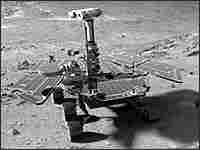 What Spirit might look like on Mars. Researchers took a photorealistic model of the Spirit rover and placed it, to scale, within an image taken by the rover. NASA/JPL-Caltech hide caption 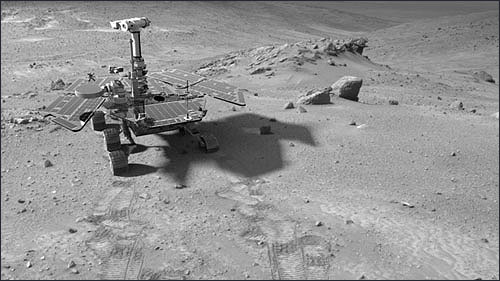 What Spirit might look like on Mars. Researchers took a photorealistic model of the Spirit rover and placed it, to scale, within an image taken by the rover.

A Day in the Life of a Rover

As the missions lasted longer, scientists drifted back to their home institutions. But thanks to new tools developed by NASA mission managers, being back home did not mean being out of the loop.

"You could literally be in Starbucks, with your laptop and your cell phone, and be an active participant in the daily operations process for the rovers," says John Callas, current project manager for the rovers.

Callas has been working with the rovers from the start. Sadly, he says, both rovers have begun to have problems. For instance, Spirit's right front wheel has stopped working.

"That means we have to drive with five wheels," says Callas. "When a wheel stops working on these rovers, it doesn't spin anymore. So we have to drag the wheel. It's like on your car, it would be like having one wheel permanently braked. It makes for very difficult driving."

Spirit was supposed to park on a nearby hill for the winter so its solar panels would point more directly toward the sun. But project scientists had to settle for ridge that was closer.

On the other side of Mars, Opportunity is also having driving woes.

"Each rover has four steering actuators, one for each front wheel and one for each rear wheel. The right front one has jammed on Opportunity," says Callas. That's made turning more of an adventure.

The rover results haven't rewritten the textbooks on Mars, but their search for evidence of surface water has been successful. They've found evidence that ground water percolated to the surface through rocks, but they haven't found proof of standing water, such as lakes or rivers.

Albert Haldemann, deputy project scientist, says Opportunity is driving south toward a huge crater that could hold that evidence.

"Once we get to Victoria crater with Opportunity, however, we may see some stunning views of large stacks of sedimentary rock that would probably be at least spectacular and possibly also very informative scientifically," says Haldemann.

NASA has two more Mars-landing missions in the works. A mission called Phoenix is scheduled for launch in August 2007. That craft will go to the Martian north polar region, where there's evidence of water in the form of ice.

"With Phoenix, we're going to go to where we know the water is, dig into the water, and investigate what's in the water," says Barry Goldstein, a project manager for Phoenix.

Phoenix has instruments that could detect any past or present signs of life in that water. Goldstein says that unlike the rovers, Phoenix probably won't make it through a Martian winter. In the Martian summer, the frozen carbon dioxide or dry ice that's also on the north pole of Mars evaporates into the air. In the wintertime, the carbon dioxide turns back into frost.

"What we expect will happen is we will be buried in over a meter of solid CO2," says Goldstein.

Spirit and Opportunity don't have to worry about that prospect. But they will face temperatures of more than 150 degrees below zero. Callas knows that someday, an end will come for his beloved rovers.

"We have very much personified these vehicles. We think of them as our children, because they have very human characteristics. They see, they move, they interact, they respond to our commands, and they think on their own," says Callas.

Haldemann, a colleague of Callas', feels much the same.

"We're used to waking up every day and seeing the latest from the rovers," says Haldemann. "They're always there, day in and day out. If one day that stops being the case, it will be very sad."