Accessibility links
How to Throw a Kentucky Derby Party A Louisville native offers her friends a taste of Kentucky Derby excitement from her living room in Washington, D.C. She serves mint juleps and a version of Derby-Pie® worthy of Churchill Downs.

How to Throw a Kentucky Derby Party

How to Throw a Kentucky Derby Party

(Even If You Don't Know the First Thing About Horse Racing) 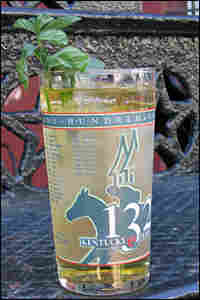 Love them or hate them, mint juleps are de rigueur for a Kentucky Derby party. Scroll down for recipes. Jesse Baker, NPR hide caption 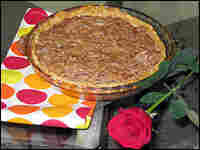 I grew up in Louisville, Ky., in the heart of horse country. But that doesn't mean I ever got to go to the racetrack.

The 2006 Kentucky Derby takes place on May 6. It's actually the 10th race of the day, and this year will start at roughly at 6 p.m. ET. It's a good idea to keep the television on and tuned in to the race for the duration of the party; it provides some ambience and makes you feel like you might actually be at the track.

You Bet: Most of the people you've invited probably won't know much about the race itself. You can still offer them a rooting interest with this simple plan: Find the list of horses in the race at www.kentuckyderby.com. The list includes a horse's owner, jockey, odds of winning, gate position and the jockey's silks and number. Print out the list and cut it into slips, one horse per slip. Fold those in half and put them in a Derby Hat (see below). As guests arrive, have them pull a slip out of the hat. Now they've got a horse and enough info for some lively track talk. You can ask guests to ante up (make the wager small to avoid hard feelings later) and divide the pot any way you want. Winner doesn't have to take all; remember, the Derby pays for win, place or show (first, second or third) just like other horse races.

Hat Heaven: There are no real hard or fast rules about what to wear to a Derby party, except this: If you're a woman, don the tackiest hat you can find. I'm not talking baseball caps, either. Derby hats feature feathers, gauze netting, gaudy fake flowers, the works. If you can incorporate a horse motif into your hat, more power to you. Originally, the floppy hats were intended to shade the ladies who attend the races — and prevent too many freckles. But hats have evolved into a fashion statement, a necessity for any female Derby party attendee.

It wasn't that my parents were against gambling, per se. My father has always been an extremely lucky gambler. His trips to the riverboat casinos have given a whole new meaning to all those "Gettin' Lucky in Kentucky" T-shirts. He once came home with $20,000 in cash, after just an hour playing the slots.

Surely some of that luck was hereditary, I'd argue. But no matter how often I made that case as a teenager, I never persuaded my parents to let me hit the horse races.

Jesse Baker prefers guava mango tango to plain old vanilla and wearing shoes without socks. She considers herself a Louisville native, though she's not sure if the city is as willing to claim her as its own. Baker is on the staff of Weekend Edition Sunday — and NPR's resident Kentucky Derby aficionado.

My mother insisted that the Kentucky Derby -- which is run each year at Churchill Downs during the first weekend in May -- was every bit as exciting from our living room. After all, we had a big-screen TV with surround sound. The way my father cranked the volume up, you could hear the announcer call the races from two houses over. And so, my memories of the Derby come from the parties my parents threw every year.

I have to admit, as an adult, I rather like that I have these traditions to share with my non-Kentucky-bred friends. Instead of making the trek from my home in Washington, D.C., to Louisville, I offer my friends a taste of the excitement they would have found at the Derby -- live and in person -- from my living room. And no Derby party is complete without two key ingredients: mint juleps and our family variation on a pie sold under the brand name "Derby-Pie®."

As any Louisvillian will tell you, "It ain't Derby without a mint julep." And yet, the same Louisvillians also will tell you that they won't touch the stuff the rest of the year. They prefer their bourbon straight up, without the syrupy, green sweetness that gives the drink its swampy, amber coloring. But even the bourbon purist won't pass up a mint julep on Derby Day.

The drink did exist before the race. Mint juleps probably were first served in the early 1700s in Maryland, Virginia and North Carolina. However, the first juleps weren't made with bourbon, but rum or rye whiskey. (Kentucky bourbon wasnt commonly distributed until later in the 19th century.) Legend has it that mint was planted outside the clubhouse of Churchill Downs in 1875 so the drink could be served at the very first Kentucky Derby.

Now, the good people of Churchill Downs boast that julep slingers sell more than 120,000 of the minty mixed drink during Derby weekend. That's more than 10,000 bottles of bourbon, 1,000 pounds of fresh mint and 60,000 pounds of ice, all to celebrate a one-and-a-quarter-mile race that lasts less than two minutes.

Everybody drinks them, whether they're sitting in the swanky, star-studded stands of millionaire's row or wallowing in the muddy ruckus of the infield. The trick is to not fall for the prepackaged stuff, but to make your own "mint simple syrup" instead. This means dissolving two cups of sugar into two cups of boiling water, pouring the syrup into a bowl with mint sprigs and refrigerating it overnight. The whole process takes less than 10 minutes.

Bear in mind, the mint julep is something of an acquired taste. As well, just a little mistake along the way and you'll be sipping something closer to mint mouthwash than a mixed drink.

Something with less of an acquired taste -- and a shorter Derby history -- is something that many, perhaps improperly, call Derby pie. It was first served half a century ago in a small bed-and-breakfast in Prospect, Ky. The family members who ran the inn all had their own ideas about what to call the pie. So they did the only fair thing: They drew a name out of a hat. By 1968, Derby pie had become a smash hit at the Kentucky Derby -- and the name was registered with the U.S. Patent Office and the Commonwealth of Kentucky.

A Derby-Pie® is made with walnuts. My family makes a variation using pecans. The way we make them, they're essentially liquored-up, chocolate-pecan pies. You add bourbon right before baking, which gives the pie a little Kentucky kick. If you're pressed for time, you can always bake it the night before the party and warm it up just before serving. Unlike the annual symbolic sipping of the mint julep, Derby-Pie® and its variations have legions of devoted fans year-round.

Add sugar to boiling water. Continue to boil for about five minutes, or until sugar dissolves; do not stir.

Place 8 sprigs of mint in an airtight, plastic container, and pour the sugar-and-water mixture over the mint. Refrigerate.

1 cup pecans (you can chop them if you like, for a smoother texture.)

In a large mixing bowl, beat the eggs and add the sugar. Mix in melted butter and bourbon. Stir until you have a gritty paste. Stir in cornstarch, then the pecans and chocolate chips.

Pour mixture into a nine-inch piecrust and bake for 45 minutes at 350 degrees.

Let cool for about an hour. The pie should be served warm with a dollop of whipped cream on top. (It can also be refrigerated overnight and reheated before serving.)