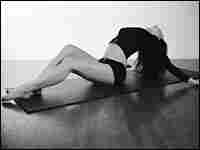 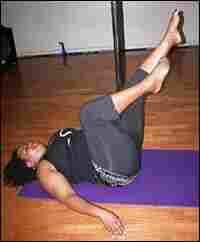 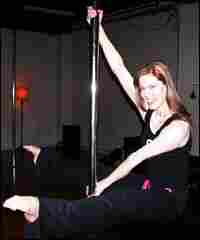 S Factor instructor Amy Olsen shows off one of her signature moves on the pole. Devin Robins, NPR hide caption 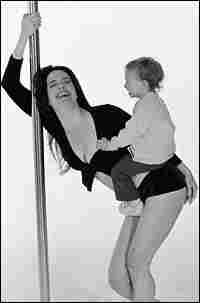 Sheila Kelley, pictured here with one of her two children, once had a strip pole installed in her husband's office. Sheila Kelley's S Factor hide caption 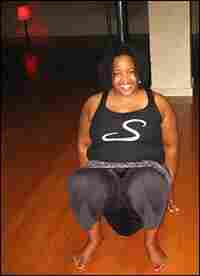 Farai Chideya tries out a "pole slide" move with her back to a strip pole at the S Factor studios. Devin Robins, NPR hide caption

You know, I'm a fairly adventurous kind of gal, and so far during my fitness challenge, I've lost 11 pounds by biking, doing yoga and working out at the gym.

But one day, I was watching Oprah and saw a woman pole dancing -- that's right, like in a strip club. And I thought, "Now that puts the 'challenge' in fitness challenge."

Kelley has been acting for almost 20 years and has appeared on some of television's biggest shows, including The Sopranos and ER. In 2000 she produced and co-starred in the HBO film Dancing at The Blue Iguana.

When I walked into the Los Angeles-area studio, what I didn't see was just as important as what I did. There was no harsh overhead lighting, and no mirrors. My teacher Amy Olsen explained that mirrors can sometimes make clients play to the mirror instead of feeling the joy and flow of the exercise.

As I learned in my yoga class, what feels good to one person can be torture for someone like me. Olsen put me on a yoga mat and started the warm-up. She once taught ballet, and she's lean and flexible. I am neither.

After warming up, I was ready. I wanted to be one of those women who could take a flying leap at a chrome pole, grab it between my thighs, and gracefully descend to the floor.

Of course, we had to start small by learning the "flirt." You lie on your back, put your legs in the air and rub them together seductively. At least, that's how it's supposed to look. Honestly, even the simplest moves require strength, flexibility, and the ability to smile seductively through the pain.

Kelley got back in shape using strip-dance techniques after having two children. She even installed a pole in her husband's home office. She finally opened her first studio five years ago and now has seven locations from Los Angeles to New York.

Kelley has had plenty of celebrity clients, but women of all ages and sizes are lined up to strut their stuff. Just from one class, I can see how this could be addictive. And by the end, I finally figured out how to flirt -- like a dancer, that is.