Accessibility links
Disinfectant Wipes Safe for Computer Keyboards Is your computer making you sick? It's not a stretch to realize your keyboard can harbor all sorts of bugs. The good news is that many disinfectant wipes -- even sterile water -- do a safe job of keeping bacteria at bay. 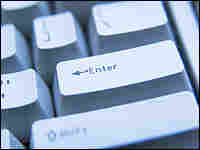 Many disinfectant wipes can keep bacteria at bay without harming a computer keyboard. Corbis hide caption

Is your computer making you sick? It's not always easy to point to the cause of health problems, but Bill Rutala is always looking for sources of infection. His job is to battle bacteria at hospitals and clinics in the University of North Carolina health-care system. A few years ago, his focus landed on computer keyboards. The keyboards that Rutala studied were in a hospital, but what he found applies to keyboards everywhere -- if they're shared.

Rutala knew keyboards could carry bacteria, and although most of those bacteria are harmless, a few can cause problems. But there was something he and his colleagues didn't know: Would disinfectants harm keyboards?

His team laced keyboards with bacteria, and then tried out a variety of commercial disinfectants, as well as sterile water.

"We determined that all of the disinfectants we used were effective in removing the microorganisms that we intentionally contaminated the computer keys with," Rutala says.

Even the sterile water worked. And one class of disinfectants, which includes Sani-Cloth Plus, Cavi-Wipes and Clorox Disinfecting Wipes, kept bacteria from re-growing for two days or more. None of the compounds harmed the keyboards, and the computers remained functional.

For once, this is an experiment you can try yourself.

"It might be a good idea for anyone who shares a computer with other people to clean the keyboard with a disinfectant wipe before use by a different person," he says.

But cleaning your keyboard doesn't mean you'll be completely protected.

"Everything in our environment is contaminated with microorganisms," Rutala cautions, from pens and phones to eyeglasses and chairs.

If you're not up for wiping down every surface you touch, Rutala recommends one of his own practices: frequent hand-washing.