Accessibility links
Teacher, School Sued over Gay Fairy Tale Massachusetts parents infuriated that their second graders were read King & King, a fairy tale about two gay princes, are suing the school and the teacher in federal court. The parents say schools are violating their religious freedom. But in Massachusetts, where gay marriage is legal, public school officials say they not only can talk about gay couples, they are required to.

Massachusetts parents infuriated that their second graders were read King & King, a fairy tale about two gay princes, are suing the school and the teacher in federal court. The parents say schools are violating their religious freedom. But in Massachusetts, where gay marriage is legal, public school officials say they not only can talk about gay couples, they are required to. 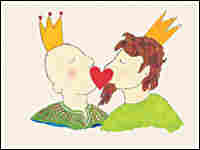 This is DAY TO DAY, I'm Alex Chadwick.

And I'm Madeleine Brand. Coming up how to avoid horrible diseases when you travel.

CHADWICK: First, from Massachusetts, the story of a fairy tale that got a teacher sued for reading it to her second grade class.

The story is about two gay princes. Several parents objected to it, some sighted religious beliefs. School officials say gay marriage is legal in Massachusetts, teachers have an obligation to talk about it.

It was halfway through a lesson weddings when a second grader at Esterbrook Elementary School in Lexington handed the teacher a colorful book with a king on the cover and asked her to read it.

On the tallest mountain above the town, it starts, lived a queen. She decides her son should marry and invites princesses from around the world, but one by one the prince rejects them all until he notices the princess who's come with her brother.

Ms. ROBIN WORTHLAND (Parent): And suddenly it was love at first sight and you see the hearts and butterflies flying between the two of them and they kiss at the end of the book.

SMITH: Lexington parent Robin Worthland says she was shocked to hear about the book called King and King from her seven year old son.

Ms. WORTHLAND: And he said, Mom, isn't that so silly? And I thought, What are they trying to teach these children?

SMITH: Worthland says she felt blindsided by the school for introducing what she calls such a controversial theme to seven and eight year olds right when they're thinking that girls have cooties.

Ms. WORTHLAND: It's introducing the concept that if I don't like other girls, then maybe that means that I'm gay. I mean it can introduce confusing ideas to a young, young child.

SMITH: At the very least, Worthland says, the school should have warned parents the book was being read. Massachusetts law requires notification of any lessons dealing with human sexuality so that parents can opt out.

Failing to notify in this case, she says, violated her religious freedom and her right to privacy.

Ms. WORTHLAND: It makes me think that they are trying to indoctrinate the children and normalize and affirm homosexuality before the parents have had an opportunity to present a balanced view.

SMITH: But school officials say a book like King and King does not require parental notification because it has no more to do with human sexuality than Sleeping Beauty, for example, or Cinderella.

Mr. PAUL ASH (Superintendent, Lexington Public Schools): There wouldn't be any controversy if the book had a prince marrying a princess.

SMITH: Lexington Superintendent Paul Ash says he might have thought twice about a book like King and King a few years ago, but since gay marriage became legal in Massachusetts, he says, he feels both a legal and a moral obligation to teach kids about same sex couples and to make sure that kids of gay families don't feel like they're being treated differently.

Mr. ASH: I believe my job is to honor the laws of the Commonwealth of Massachusetts, and I don't think we should allow people to say, Well, I believe in equal rights, but we don't believe that that ought to be taught to children.

SMITH: Still, Ash says, that's exactly the message he's getting in many of the hundreds of emails he's received. Along with those sending congratulations and condemnations are the many who feel conflicted, like 44-year-old Lexington mom Anne Needleman.

Ms. ANNE NEEDLEMAN (Parent): I have never thought so much about this issue and I'm like of so many minds and I'm like how can I think one way and feel another?

SMITH: Needleman says she doesn't necessarily object to gay marriage, but she would object to a gay fairy tale being read to her six year old daughter.

Ms. NEEDLEMAN: It's gonna make her say, why did the boy pick a boy?

SMITH: But a minute later six year old Taylor chimes in and says she already knows about kids with two daddies or two mommies.

Ms. T. NEEDLEMAN: Remember the Noah from the Kid Stock?

Ms. A. NEEDLEMAN: Yeah. Noah's moms are married to each other.

SMITH: Needleman says she does want her daughter to be accepting of same sex couples, but she says she still resents the way she feels that gay marriage is being forced on her.

Ms. A. NEEDLEMAN: They're just so, You have to accept me. And it's like, You're starting to annoy me in a way. You know what I mean? That sounds really mean, but that's just how I feel about it.

SMITH: To opponents of gay marriage the whole controversy in schools is one big I told you so.

Bob Knight of Concerned Women for America says gay activists were disingenuous when the argued that gay marriage would help same sex couples but wouldn't do anything to affect anyone else.

Mr. BOB KNIGHT (Concerned Women for America): Over the next few years we'll see that this really wasn't about two people wanting to be left alone and to live like everyone else, but it was more about harnessing government power to force others to bend to the idea that two men are the same as a man and a woman.

SMITH: But Massachusetts is not the only state with controversy over a gay friendly curriculum. In fact, the publisher of King and King says that book alone has stirred opposition in a half a dozen schools, and each time it does, the book goes into additional printings. 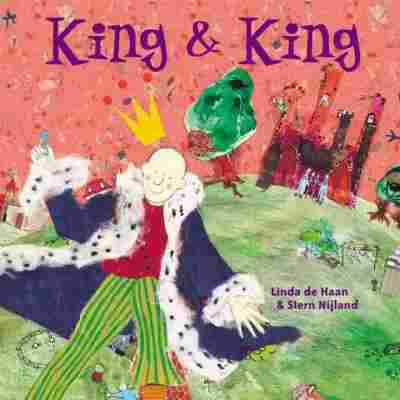