Accessibility links
Healing Music in New Orleans Festival's Gospel Tent On Friday morning, New Orleans kicks off its first jazz festival since Hurricane Katrina. This year, the Jazz & Heritage Festival has adopted the motto "Witness the Healing Power of Music." Nowhere will this be more evident than in the festival's Gospel Tent. 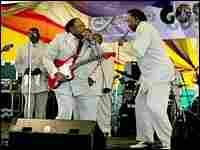 The Rocks of Harmony perform in the Gospel Tent at the 2005 New Orleans Jazz & Heritage Festival. Douglas Mason hide caption 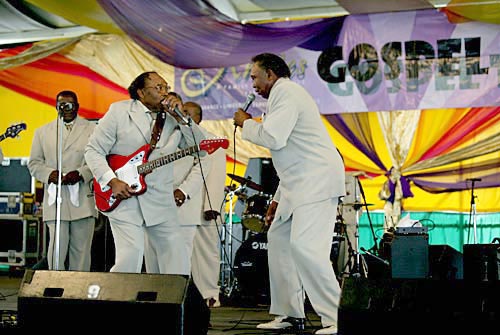 The Rocks of Harmony perform in the Gospel Tent at the 2005 New Orleans Jazz & Heritage Festival. 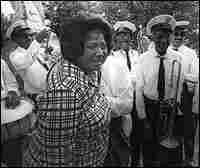 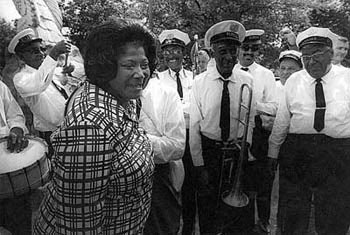 In 1970, gospel legend Mahalia Jackson returned to her hometown to appear at the first New Orleans Jazz & Heritage Festival. 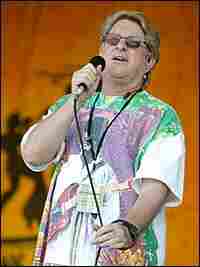 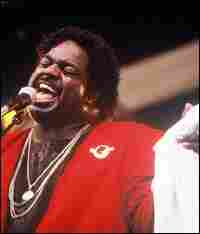 Raymond Myles, a local gospel favorite whose music is featured in this report, was a popular performer at the Gospel Tent. He was killed in a carjacking in 1998. Sydney Byrd/Legacy Recordings hide caption

On Friday morning, New Orleans kicks off the 37th annual Jazz & Heritage Festival -- its first since Hurricane Katrina. This year, the festival has adopted the motto "Witness the Healing Power of Music." Nowhere will this be more evident than in the festival's Gospel Tent. 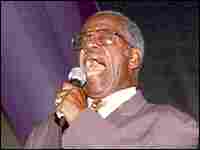 As in years past, hundreds of thousands are expected to attend the music celebration during the next two weeks to hear rhythm-and-blues bands, jazz combos, a lot of Louisiana performers -- including more than 40 gospel choirs, harmony groups and singers.

Jazz Fest, held at the Fair Grounds racetrack, is part of the rhythm of life in New Orleans -- one of the vital signs of a city in recovery. To hear it from festival director Quint Davis, no part of the celebration is more accurate a measure than its most consistently popular stage.

"A lot of people up there will have lost everything, and be struggling to come back and, you know, this is a faith-based music," Davis says. "When they come in there, they talk about having church. So it's not a church -- but it's a place where you have church."

As long as there has been a Jazz Fest, there has been a Gospel Tent. Since 1970, it has presented legends such as Mahalia Jackson, Shirley Caesar and the Dixie Hummingbirds. But the vast majority of the gospel groups have always been homegrown.

Davis was 23 years old when he put together the first festival.

"At that time, 1970, not many white people had seen black gospel in its full glory," Davis says. "Gospel was not common at blues festivals or jazz festivals. So, you know, we got on kind of a mission there to bring gospel on down to the front of the bus, as we called it."

The first year, the Gospel Tent was basically a 10- by 20-foot canopy with no sides, no stage and no sound system. New Orleans gospel legend Sherman Washington agreed to help Davis line up gospel groups to perform at the tent.

"God's work is very, very strong and powerful. It's in the music and it comes down in the Gospel Tent " Washington says.

But even God's work can hit a few bumps, especially when it comes to the separation of church and the state of partying that can take place in and around the Gospel Tent.

Washington recalls "a little conflict" with ministers who complained about spectators bringing liquor into the tent. But he says it usually involved "a couple of cans of beer... We just went on."

At first, major choirs and churches didn't want to perform "outside the church environment," Davis says. Once Washington persuaded gospel groups to come, "that gave us credibility in the community."

Today's Gospel Tent can hold up to 1,500 people. That it's consistently packed is a testament to the universal appeal of a music that reaches people of all beliefs.

"Gospel music is such a raw, direct line to something that is spirit-filled, and spirit-full that you just can't help feel that gospel music can move everybody," Davis says.

Washington agrees. "All of it, all of us -- we're looking up to the same God."

At the age of 80, Washington still runs the Gospel Tent, as well as leading The Zion Harmonizers, a group whose harmonies reach back to the a capella roots of modern gospel music. The group has been around for 67 years, and Washington is the only surviving original member.

Who'll take over when Washington retires?

"That's a good question," he says. "I don't know. I'm right at 80 years old now and I've been there ever since I was very young. And I still love it. So I know God's going to let me keep the health, the strength to keep going. God is still in charge, partner."

Ashley Kahn is the author of the soon-to-be published book The House That Trane Built: The Story of Impulse Records. The New Orleans Jazz & Heritage Foundation Archives contributed much of the material heard in this report.