Accessibility links
Events of 'United 93' Terrifying on Screen United 93, a movie about passengers who fought for control of a hijacked plane on Sept. 11, is hard to get out of your mind, no matter how hard you try, according to Los Angeles Times and Morning Edition film critic Kenneth Turan.

United 93, a movie about passengers who fought for control of a hijacked plane on Sept. 11, is hard to get out of your mind, no matter how hard you try, according to Los Angeles Times and Morning Edition film critic Kenneth Turan. 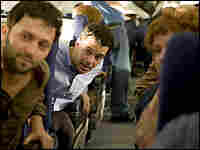 United Airlines Flight 93, headed from Newark to San Francisco, was the last of four planes to be hijacked on September 11th. It was also the only one that didn't hit its apparent target.

The flight's passengers and crew, aware of the fate of the other three planes, fought back against their armed captors.

A new film, called simply, United 93, deals with what happened on that flight. Los Angeles Times and MORNING EDITION film critic Kenneth Duran has this review.

United 93 takes some getting used to.

This is a draining film, exceptionally accomplished, but extremely difficult to watch. It's a film that's easier to admire from whatever distance you can manage then to embrace with any kind of emotional intimacy.

This may have been British filmmaker Paul Greengrass's intention, but only up to a point. It's a mark of Greengrass's unequal gift for believably recreating reality that once seen it's impossible to get United 93 out of your mind, no matter how much you may want to.

This film, like Greengrass's earlier, Bloody Sunday, uses intimate camera placement, and rapid, purposeful cutting, to put us inside this complex narrative. This is a film that wrings you out completely, makes you feel you have lived the story along with the participants.

Unidentified Man #1: (As Character in “United 93") Cleveland just called. There's a United 93, the controller heard screams coming from the cockpit. Sounds like…

DURAN: Greengrass made sure none of the dozens of actors had a recognizable face. He hired performers who can't be told apart from the handful of real people on the ground who play themselves.

Unidentified Man #2: Listen, I'm not--I'm not going to take any more chances. We've got stuff flying around we have no control over. And I don't want a board full of these planes hitting every building on the east coast. This is a National Emergency. Everyone lands, regardless of destination.

Unidentified Man #3: They have hundreds of international flights coming in. They're already in the air.

Unidentified Man #2: No. I don't want any more international flights crossing the borders. They'll have to go back where they came from. Nobody's coming into…

DURAN: The United 93's press kit includes 26 pages of biographies of the real flight's passengers and crew. It does not have a single actor bio in it--a first in my experience.

The idea behind this is the notion of having a group, rather than an individual protagonist, of presenting the people as a kind of collective hero. This comes squarely out of British documentary tradition. Emotionally, however, it is hard not to feel that United 93 may have gone too far in that direction.

The problem is not that the film isn't respectful of the families of the victims. It's that what happened on September 11th is still terrifying. The horror of what we see onscreen is so vivid it overwhelms the idea of a group hero. To reach us at the deepest emotional level, drama needs well-defined protagonists.

Intellectually, we know we should applaud United 93, and we do. But it is a film envisioned as a memorial tribute, and in our hearts, at this moment, we want something more.

United 93 should have been made now, when memories and passions are still fresh. But it may play better in the future.