Accessibility links
At Gallaudet, a Turn Inward Opens New Worlds In 1988, students at Gallaudet locked the gates of the Washington D.C. campus in protest of the university's new, hearing president. The takeover ended with appointment of a popular, deaf dean, I. King Jordan, to the post. Now, Jordan is leaving. His legacy: a school that's made communication easy for a culture that's all too often isolated. 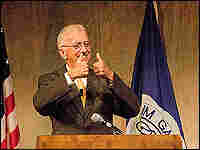 The selection of I. King Jordan in 1988 to lead Gallaudet was a historic moment for the deaf university; Jordan was the first deaf president in its 150-year history. Gallaudet University hide caption 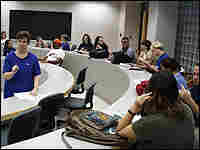 Gallaudet's outgoing president speaks about his legacy, and how the Deaf President Now movement changed and energized the deaf community. April 30, 2006

Note: NPR is providing a full transcript of this story:

DEBBIE ELLIOTT, host: Gallaudet University is a unique school for the deaf in Washington, D.C. The school's trustees are meeting this weekend to pick a new president. Word of the choice could come as early as Sunday night. The last time Gallaudet chose a president -- in March of 1988 -- angry students took over the campus. Their protests changed the world for deaf people. NPR's Joseph Shapiro recently visited Gallaudet:

JOSEPH SHAPIRO, reporter: What got the students so angry 18 years ago was that the board of trustees picked a hearing woman, someone who had no experience with deaf people. To the students, that was insulting, paternalistic.

Here was a school that claimed to educate deaf students to make it in the world. But now seemed to be saying no deaf person was good enough to run their own school.

The students got heavy chains and locked the black-iron gates to the campus of red-brick Victorian buildings.

They took over the campus. And got lots of media attention.

ROBERT SIEGEL, host, from archive tape: Since Sunday, students at Gallaudet University in Washington, D.C. have blockaded the gates to the campus to protest the new president.

SHAPIRO: There was even more attention on the seventh day of the student takeover. That's when the board of trustees reversed itself and chose somebody else: a popular Gallaudet dean named I. King Jordan.

Students were thrilled to get the first deaf president in Gallaudet's history. They told a reporter for NPR they expected it would change the school and the lives of deaf people in ways big and small.

INTERPRETER, archive tape: I mean imagine, Jerry says, now the world has a role model. They have a role model: A deaf president that they, I can look up to and I can be like him. They can say that anything is possible. We have made that possible here.

Tim says, we can always become a president. In the president's house now there will be closed-captioned TVs, the phones will be TTYs and there will be flashing lights for the doorbells for the first time in the history of this institution.

SHAPIRO: It's a recent day on the Gallaudet University campus, with daffodils and apple blossoms in full bloom.

SHAPIRO: Jordan shows off the house where he and his wife live.

It's a museum-quality Victorian home. Inside, there's dark-cherry wood. A painting of Abraham Lincoln: He signed the charter that created the school in 1864. On the dining room walls, there's silk wallpaper the color of red wine.

And, just as those excited students dared to imagine 18 years, today the president's house is set up for a resident who can't hear with video phones and captioned television.

JORDAN: You stay there and I'll ring.

SHAPIRO: Down to the flashing lights that go off whenever the door bell rings.

SHAPIRO: For deaf people, the student protests 18 years ago are a revered moment in history. Deaf people call it "Deaf President Now," or DPN.

Back then, the press called it a Selma, or Stonewall, for the deaf.

JORDAN: One of the things that the Deaf President Now Revolution did was change the way deaf people are thought about.

SHAPIRO: King Jordan has a big, white smile. He's 62, tall, with the lean build of a marathon runner, which he is.

SHAPIRO: Jordan was 21 when he was in a motorcycle accident and lost his hearing. But because he already spoke before he became deaf, today Jordan can easily use his own voice. During our conversation, an interpreter rapidly signs my questions to him.

JORDAN: We deaf people were too quick to accept limitations other people imposed on us. You can't do this can't do that. And we said OK. Cause we never tried. We never did, we never did it before. Hearing people saw we never did those things, so they assumed we couldn't.

And that's not always easy for Gallaudet. Because as deaf students have more options, one of those options is to not go to Gallaudet at all.

Paulone's parents were students at Gallaudet. She was just an infant. But being at the protests is one of her earliest memories.

PAULONE: My mother and father's generation, now their vision of what a deaf person could do was very limited. They were under the impression they could become teachers and that was pretty much it. But then DPN happened.

SHAPIRO: At the time of the protests, Gallaudet students -- and their teachers -- often took it for granted that career options were limited. Maybe teach at a deaf school. Or work as a newspaper printer, or in some other job with noisy machines where it was an advantage not to hear.

Now, Gallaudet has clubs for students who expect to go on to med school and law school. Those didn't exist 18 years ago.

Today Paulone is one of those Gallaudet students who can have big dreams. She may teach. Maybe even back at Gallaudet some day. But first, she's planning to go to graduate school and get her Ph.D.

PAULONE: I would probably go to another university. There is one particular university, University of Miami. They have a very good program for the field that I am in.

One reason is that there were more deaf college students back then. They included thousands of children who became deaf when in the 1960s their pregnant mothers got rubella.

But another reason is simply that it's easier now to go to other colleges, thanks to the Americans with Disabilities Act. It led other schools to provide sign language interpreters.

JORDAN: I'm a deaf man and I'm a university president.

SHAPIRO: King Jordan explains that Gallaudet's in a spot familiar to historically black colleges and women's colleges. It has to compete harder for its students now.

JORDAN: So as a deaf man I want every deaf high school student to have a choice to go anywhere he wants. Or she. To be able to go to Harvard or the University of Texas or Podunk or anywhere. But as the president of Gallaudet, I want the best and brightest deaf people to come here.

SHAPIRO: So Jordan has raised standards and added new buildings. He shows off a spot on the far side of this small campus.

JORDAN: This is where the new language and communication center is going to be. The building's going to be big, 80,000 square feet.

SHAPIRO: Jordan says the best way to get students here is to make Gallaudet a place that welcomes deaf people in a way they won't find anywhere else.

JORDAN: The whole building is going to be designed in what we call a Visucentric way. We coined that word V-I-S-U, Visucentric.

SHAPIRO: Everything will be built to make it easy for deaf people to communicate. The hallways won't end in corners. They'll curve. That'll make it easier to sign to someone far away. There will be a raised amphitheater with a massive high-definition television screen for campus-wide meetings. And then they're the elevators.

JORDAN: Glass elevators. People in elevators, you can see them, sign and talk to them. There will be visual site lines so that pretty much everything is visually accessible and friendly.

SHAPIRO: The next president at Gallaudet will be deaf. The three finalists include Jane Fernandes. She's the provost at Gallaudet now. Stephen Weiner's a professor and former administrator. Ronald Stern is superintendent of the New Mexico School for the Deaf.

In campus conversations and on Web sites, there's debate over their qualifications and personalities. It's been intense, sometimes even personal and nasty.

The board of trustees arrived on campus this weekend. It's expected to make its choice soon.

A Look Back at DPN in Pictures