Accessibility links
Jan Vogler and Mira Wang: A Musical Marriage Cellist Jan Vogler and violinist Mira Wang are accomplished soloists. And both are married — to each other. They discuss the challenges of juggling independent careers, marriage and parenthood. They also perform three selections. 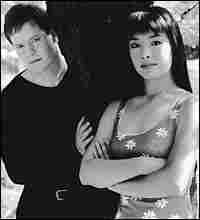 Cellist Jan Vogler grew up in East Germany, in a family of musicians. Violinist Mira Wang was born in China. Both are accomplished international soloists. And both are married -- to each other.

Vogler and Wang talk to Robert Siegel about the challenges of juggling independent performing careers, marriage and parenthood. Despite the difficulties, Wang says the couple has learned how to make the relationship work; she says it was important to her to have both a family and a career. The couple discuss their two young daughters -- and life on the road with them.

They also share how, unlike many other married musicians, they discovered they could "play together without killing each other," and how they are each other's critic and coach.

They perform a prelude by Reinhold Gliere, Ervin Schulhoff's Duo for Violin and Cello and Handel/Halvorsen's Passacaglia.