Accessibility links
Study Finds English Are Healthier than Americans A new study comes to a conclusion that surprised even the researchers who conducted it: Middle-aged whites in England are significantly healthier than middle-aged whites in the United States. That's despite the fact that the United States spends twice as much per person on health care. 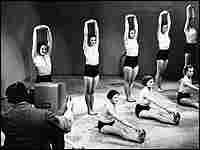 One reason for the discrepancy in health between the English and Americans may be the obesity epidemic; it only hit Britain recently. Above, members of the British Women's League of Health and Beauty exercise for the TV camera, c. 1936. BBC/Corbis hide caption

The researchers from England and the United States were just trying to find out why poor people are less healthy than rich people. They looked at health data from thousands of people in England and the United States, all of them 55 to 64 years old, all of them white. They only looked at whites so they could isolate the effect of socioeconomic status without respect to race.

Michael Marmot of University College in London said the results astonished him and the other researchers.

"It was a bit of a big shock," Marmot says. "I just didn't imagine we'd find it consistently across the board, with worse health in the United States compared with England."

In the categories of diabetes, blood pressure and cancer, England's poorest citizens -- those in the lowest one-third of income levels -- did better than the richest one-third of Americans.

The American researcher working on the study, economist Jim Smith of the Rand Corporation, said that, at first, Marmot and his colleagues didn't believe the data.

"The first response I got from my co-authors was the reason for this is Americans say yes to everything, so when they're asked if they're sick or not, they'll say yes," Smith recalls. "I said, 'No, I don't think so.' So we went into biological markers where it's not what people say --we can diagnose the disease ourselves. It's a real difference, and it's huge."

But why? Smith says everyone on the research team has a favorite hypothesis, including childhood health conditions, stress and obesity. But they all agree on the factors that aren't causing the discrepancy.

It's not the different health systems. With its higher health-care expenditures and greater availability of technology, the United States should score better, not worse.

It's not smoking; rates are about the same in the United States and England.

And the American obesity epidemic only explains some of the discrepancy. Whites in England are getting fatter, but they may have been thinner than their American counterparts when they were children.

Researchers are doing a new study on what is causing the difference. Some researchers have suggested that a factor called social isolation is at play.

"We have many people working an enormous number of hours," says Lisa Berkman, a social epidemiologist with Harvard University. "But they also have no time to take care of themselves or their families, as well as maintain a certain kind of community or neighborhood or set of ties."

And what about all of the English folk who've moved to the United States. Should they worry? Perhaps, if they've lived here for a long time.

British researcher Michael Marmot says that over time, immigrants tend to take on the health patterns of their new countries.

"The longer they've been in the new country," he says, "the more the patterns of health and disease tend to affect the migrants."

But Smith points out that once you're old and sick, you might as well stay in the United States, because Americans spend a lot of money to treat diseases of the elderly. 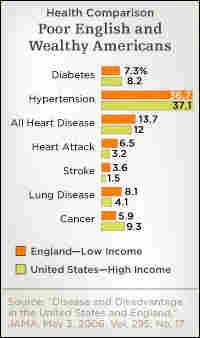 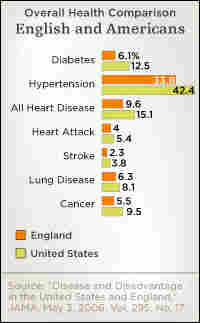 Overall, the study found white Americans are not as healthy as their English counterparts, with a higher percentage of Americans reporting diabetes, heart disease, stroke, lung disease and cancer.