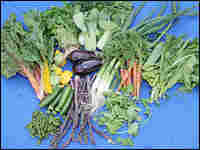 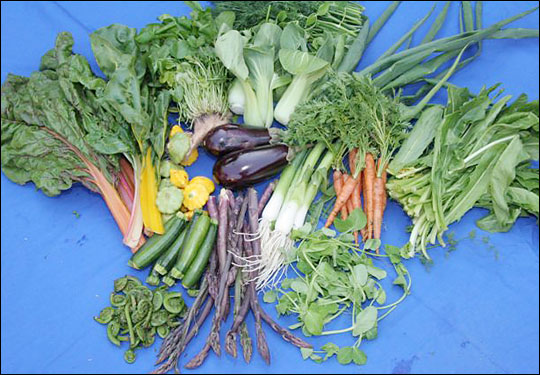 My grandma paid me one cent a dandelion to rid her yard of the yellow-flowered weeds, and it never once occurred to me to eat them.

I was deep into adulthood before I learned that dandelions are a delicacy, not a pest. But as Ralph Waldo Emerson said, a weed is "a plant whose virtues have not yet been discovered."

Bonny Wolf is a regular contributor to Kitchen Window and to NPR's Weekend Edition Sunday. She is working on a book of food essays for St. Martin's Press. You can find more information at her Web site, www.bonnywolf.com.

Ever since "seasonal" became "trendy," dandelions, ramps, fiddlehead ferns and sweet pea shoots have cropped up in produce aisles, farmers markets and on restaurant menus.

But foragers and farmers have long appreciated the culinary properties of what some may think of as weeds.

In West Virginia, North Carolina, Tennessee and Virginia, for example, whole festivals are built around the appearance of the ramp, or wild leek. Ramps grow in rich forest soil from Georgia to Canada and cross-country to the Midwest. You can forage for them yourself or benefit from the labors of others at farmers markets and specialty stores.

If you can't see ramps in the woods, you'll be able to smell them. They both smell and taste stronger than leeks or onions. After a few weeks, the leaves die and all that remains is a naked stalk that won't bloom until the middle of the summer.

People who tramp around the woods looking for ramps are the same people hunting for fiddlehead ferns, the most adorable of the spring greens. These tightly coiled fern fronds poke through the earth just after the snow melts. They look like the scroll at the top of a fiddle, hence the name.

Fiddleheads only stay curled up for about two weeks before opening into lovely, but inedible, ferns. For the best eating, fiddleheads should be a deep green, firm and no more than 1 ½ inches in diameter.

In her wonderful, useful book Uncommon Fruits and Vegetables (Harper & Row 1986), Elizabeth Schneider writes that Vermont and Maine are prime fiddlehead terrain. But the unfurled ferns, she writes, are found along rivers and streams as far south as Virginia, as far north as Newfoundland and west across half the country. They're available from early spring through early summer, depending on the region of the country.

And while others scoff, Southerners have long recognized the inner beauty of the dandelion. They stew the greens with pork and turn the flowers into wine.

Dandelions were cultivated in European gardens for centuries. The French found the affinity of dandelion greens to warm bacon, and the Italians sprinkled their cooked greens with a little hot pepper. Dandelions were intentionally brought to the New World for their uses as food and medicine.

Dandelions, of course, grow everywhere, but they also are cultivated, and markets usually carry the farm-raised version, which are less bitter than those in your front yard. Dandelion greens should be eaten in the early spring when they are the most tender.

The other spring green I've fallen for is the pea shoot. I first encountered the tendrils of the sweet pea plant at Chinese restaurants. Then I found the pretty, graceful vines at the farmers market. They are lovely in salads and, not surprisingly, taste like peas.

Because they're so tender, many spring greens can be thrown right into the salad bowl. I made a salad the other night with pea shoots, dandelion greens, baby arugula and watercress. I boiled a handful of fiddleheads, added them to the greens and dressed the whole thing with a light vinaigrette. It tasted like spring.

These greens appear at the same time baby and toddler vegetables, fava beans and asparagus come to market. What bounty.

Like beauty, spring greens are fleeting. You have to act fast or you'll miss their brief season. Then, the dandelion greens will be too bitter, the fiddlehead ferns will unfurl and the ramps will bloom. But for a few weeks, it can be springtime at every meal.

Mark Bittman offers this recipe in How to Cook Everything (Macmillan 1998), calling it "one of the great food combinations ever." He says the dish must be served warm.

4 cups torn dandelion greens (or other bitter greens such as arugula, cress or frisee), washed and dried

Place the olive oil in a skillet and turn the heat to medium. Add the bacon and cook slowly until it is crisp all over, 10 minutes or more. Add the shallot and cook a minute or two longer, until the shallot softens. Keep the bacon warm in the skillet.

Heat a salad bowl by filling it with hot water and letting it sit for a minute. Dry it and toss in the greens. Add the vinegar and mustard to the skillet, and bring just to a boil, stirring. Pour the liquid and the bacon over the greens, season to taste. It shouldn't need too much salt.

The late Edna Lewis was a Southern-cooking legend. She grew up in a small farming community in Virginia. In The Taste of Country Cooking (Alfred A. Knopf 1990), she wrote that in the very early spring, she would see her neighbors picking dandelions. For winemaking, she wrote, they had to be picked before noon. After that, the blossoms would close up tight. The wine was drunk at breakfast. This is adapted from her recipe.

Have at hand a good, clean stone crock or Pyrex container, because you will be pouring boiling water over the blossoms and a glass jar will crack and spoil your blossoms.

Pick over the blossoms. See to it that there are no spiders or bugs in them. Rinse. Drop the blossoms into the crock and pour the boiling water over them. Cover with a clean white napkin and let stand for three days where it's not too cold.

Strain through a thin, clean, odor-free cloth into a clean glass jar. Add the sugar and stir until the sugar dissolves. Cover again with a clean cloth and leave in the kitchen in a warm, draft-free place for three weeks. Then strain into clean, dry jars, filling up to the top. Tie a clean cloth over the mouth of each jar and leave to finish fermenting, which will take about four months, or until the wine stops being effervescent. Then strain carefully into clean bottles, leaving behind any sediment that settles on the bottom. Fill the bottles nearly full and cork tightly. Store in a dry, dark place.

Elizabeth Schneider's Uncommon Fruits and Vegetables: A Common Sense Guide (Harper and Row 1986) is a wonderful reference book on unusual fruits and vegetables. What follows is her guide to preparing fiddlehead ferns for sauces, sauteing or salads. She says boiling is the best way to retain the texture and color of the fiddleheads while eliminating any bitterness.

1 pound fiddlehead ferns, each about 1-1 1/2 inches in diameter

Trim the base of each fern to leave only a tiny tail beyond the circumference of each circular form. If furry brown covering remains on ferns, rub it off with a paper towel. (This procedure can be quite time-consuming). Rinse briskly under running water.

Drop ferns into a large pot of boiling, lightly salted water. Boil until tender throughout -- about 5 minutes -- testing often. Undercooked, the full flavor will not develop.

Drain well and serve at once, with melted butter. Or try these alternatives:

· Drop cooked ferns into ice water to cool. Drain and refrigerate until serving time, covered. When ready to serve, heat 3 tablespoons butter in a large skillet and saute until ferns are heated through.

· Cool in ice water, drain and dry. Serve with Hollandaise or another cream sauce.