Accessibility links
Week 7: Finding Fitness with the 'Sweet Science' It's week seven of my fitness challenge, so it's on to the Wild Card Boxing Club. I got a huge adrenaline rush from the pace and speed of sparring. Boxing was definitely the most exciting sport I've tried so far in my six-month program to get fit. 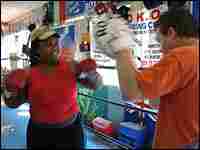 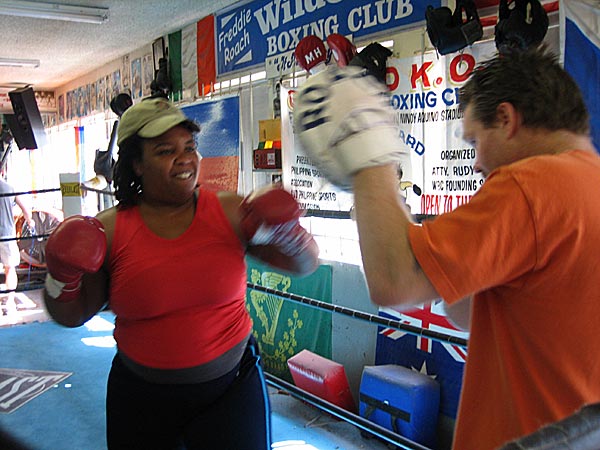 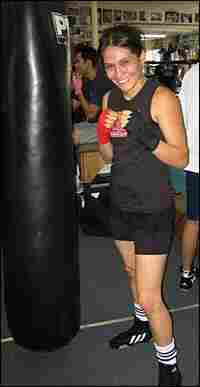 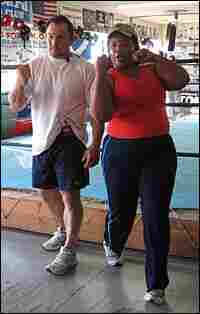 Justin Fortune, left, is one of the most sought-after boxing trainers in the business. Here he shows Farai Chideya the basics of an uppercut. Devin Robins, NPR hide caption

As soon as I saw Fortune, I knew I wasn't ready to go toe-to-toe in the ring. So I let him put me through a boxer's training session at Wild Card. I've been trying all sorts of sports during my fitness challenge, and boxing is supposed to be an all-over body workout.

Fortune is a former Australian pro boxer who once fought former heavyweight champion Lennox Lewis. He lost the fight and retired, and now he's one of the most sought-after boxing trainers in the nation.

Fortune put me through the paces at one of L.A.'s hottest boxing clubs, Wild Card Boxing in Hollywood. Everyday people go to Wild Card for a great workout, but it's also where some of the best boxers -- and more than a few celebrities -- go to train.

Fortune started me off the way he does his pro fighters: jumping rope. After I worked up a nice sweat, he taught me how to stand and what punches and combinations to throw.

Wild Card owner Freddie Roach grew up in a family where fighting was a way of life. His father was a pro boxer, and he says his backyard in the Boston projects had a boxing ring instead of a swing set.

During Roach's boxing career, he fought more than 150 pro and amateur fights. Now, as a trainer, he has coached 18 champions, including Mike Tyson, James Toney and Manny Paqua. He laced up my gloves and took me into a real ring to put to test the moves that Fortune had taught me.

I got a huge adrenaline rush from the pace and speed of sparring. Boxing is definitely the most exciting sport I've tried so in my fitness challenge.

With all the sports I'm trying, I don't know if I'll get back in the ring anytime soon. I'm set to try capoiera, basketball and surfing. But as I build up my strength and flexibility -- and drop some pounds -- I'll definitely find my way back into the ring.