Accessibility links
'Desperate Networks': Hits and Misses on the Tube Desperate Networks, a new book exploring the inner workings of the television industry, follows the sagas of top executives at the major networks through a traditional fall season. New York Times reporter Bill Carter describes the highs — the hit show Desperate Housewives, for example — to the lows, which is almost everything else on TV. The Hollywood Reporter television critic Andrew Wallenstein has a review.

Listen
'Desperate Networks': Hits and Misses on the Tube

Desperate Networks, a new book exploring the inner workings of the television industry, follows the sagas of top executives at the major networks through a traditional fall season. New York Times reporter Bill Carter describes the highs — the hit show Desperate Housewives, for example — to the lows, which is almost everything else on TV. The Hollywood Reporter television critic Andrew Wallenstein has a review.

Read the Prologue to 'Desperate Networks'

This is DAY TO DAY from NPR News. I'm Madeleine Brand.

Andrew Wallenstein usually reviews the latest TV shows for us. This week, though, he's onto something different: a new book about TV. Here's Andy with a review of Desperate Networks by Bill Carter.

Virtually all of the successful TV shows of recent years have something in common. Survivor, Desperate Housewives, and CSI took circuitous routes to primetime fame.

Carter, a veteran New York Times reporter who has covered the TV industry for decades, traces their path. In the process, he calls into question the entire production system.

Television's biggest hit, American Idol, is held forth as Exhibit A. Carter recounts the countless rejections and obstacles the show's creator and star, Simon Cowell, met along the way.

If you think Cowell is brutal on Idol, wait until you read about the ignorant executives who nearly pushed him out the door and missed out on incredible fortune.

Here's Cowell on a recent episode of Idol, offering a rare apology to a contestant.

Mr. SIMON COWELL: I think I was unfair to one person last night. And I want to apologize, because I don't think this person got the right appraisal and that person is Katherine(ph).

WALLENSTEIN: If you've ever had an idea for a great TV show, reading Desperate Networks will give you all the motivation you'll ever need to tap your inner Cowell. The book is filled with profiles of many prominent industry figures whose previous careers held little hope of greatness to come.

Anthony Zuiker, creator of the CSI franchise, was a tram operator in Las Vegas when he sold his pitch for the forensics drama. Before he produced Survivor and The Apprentice, Mark Burnett was a British Army soldier turned Beverly Hills nanny.

Desperate Networks also possesses a great feel for the vicissitudes of broadcast TV, where no network stays on top or bottom for too long. Carter adroitly traces the dramatic reversals of fortune that have shaken up all four of the biggest networks in recent years.

The one that fares worst is NBC, which is hobbled after decades of dominance by a lack of comedy hits like Seinfeld and Friends. Carter fires arrow after arrow at the Peacock network, recounting one miserable attempt after another to revive its hallowed Thursday night lineup, only to watch its few remaining assets wither.

The last one retires this year, Will and Grace. In this scene, we hear the show's star, Eric McCormack, poke fun at his character's gay identity.

(Soundbite of television program "Will and Grace")

Mr. ERIC MCCORMACK (Actor): (As Will) I don't know. Gay guys and sing-a-longs; it's all a little obvious, isn't it? I mean, I just, I hate to feel like a stereotype.

WALLENSTEIN: If Desperate Networks has a hero, and that's questionable given its unsparing treatment of an industry overrun by egomaniacs, it's Leslie Moonves, then-president of CBS. Over the past decade, Moonves painstakingly rehabilitated a network no one under retirement age seemed to watch into the most formidable schedule in primetime.

But even Moonves is treated to a portrait not entirely flattering. Carter describes him in one meeting compulsively scratching his face in a state of such agitation that he draws blood. It is these details of observation that really establishes Desperate Networks insider bona fides.

All his years covering the TV business has given Carter a knack for telling a good story. He did it before with The Late Shift, a 1994 book that detailed the rivalry of David Letterman and Jay Leno. That was adapted into a memorable HBO movie, and if they're looking for a sequel, Desperate Networks has enough material for a mini-series.

BRAND: Andrew Wallenstein is co-host of the show, Square Off on the TV Guide channel. The book, Desperate Networks, is out now. 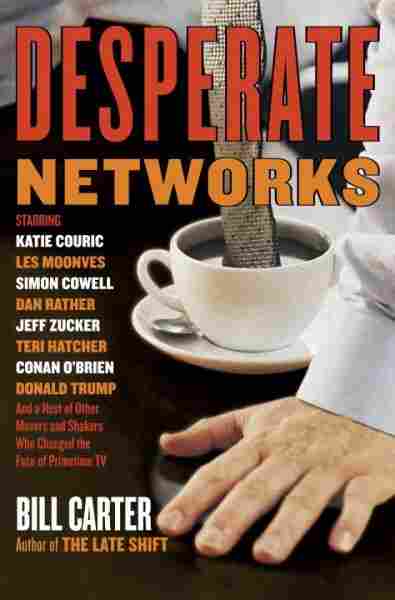