Accessibility links
Federal Jury Votes to Spare Moussaoui's Life A federal jury in Alexandria, Va., sentences Zacarias Moussaoui to spend the rest of his life in prison on charges that he was a conspirator in the terrorist attacks of Sept. 11, 2001. Moussaoui, who confessed to being part of al-Qaida, is the only person charged in the United States in connection to the attacks.

A federal jury in Alexandria, Va., sentences Zacarias Moussaoui to spend the rest of his life in prison on charges that he was a conspirator in the terrorist attacks of Sept. 11, 2001. The verdict was rendered on the seventh day of deliberations.

Moussaoui, who confessed to being part of a scheme devised by al-Qaida, is the only person charged in the United States in connection to the attacks. He was in jail on Sept. 11, 2001, but the jury found that if he had cooperated with law enforcement, the terrorist attacks could have been prevented.

The jury had earlier concluded that his collusion made Moussaoui eligible for the death penalty. They then heard emotional testimony from victims of the terrorist attacks, and the families of victims.

No Model Client: Moussaoui's Lawyer Speaks May 3, 2006
The Trial of Moussaoui, the Fight Against Terrorism May 3, 2006
Read the Jury's Verdict

All through the six-week trial, Moussaoui has behaved erratically. In March, he claimed he was working with failed shoe bomber Richard Reid, and that he was supposed to fly a fifth plane into the White House. 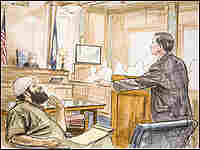 A courtroom rendering of Zacarias Moussaoui during opening statements of the sentencing phase of his trial on March 6, 2006. AFP/Getty Images/AFP/Getty Images hide caption 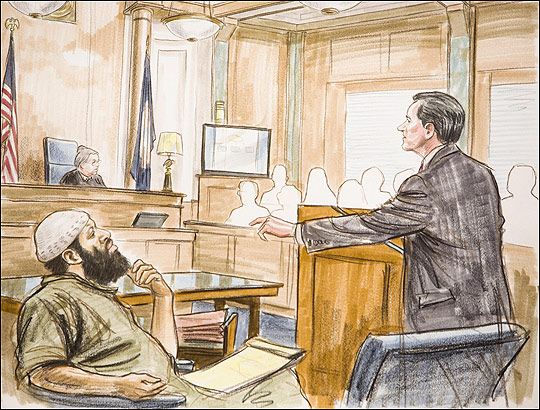 A courtroom rendering of Zacarias Moussaoui during opening statements of the sentencing phase of his trial on March 6, 2006.

ALEXANDRIA, Va. (AP) -- A federal jury rejected the death penalty for al-Qaida conspirator Zacarias Moussaoui on Wednesday and decided he must spend life in prison for his role in the deadliest terrorist attack in U.S. history.

After seven days of deliberation, the nine men and three women rebuffed the government's appeal for death for the only person charged in this country in the four suicide jetliner hijackings that killed nearly 3,000 people on Sept. 11, 2001.

The verdict came after four years of legal maneuvering and a six-week trial that put jurors on an emotional roller coaster and gave the 37-year-old Frenchman of Moroccan descent a platform to taunt Americans. The judge was to hand down the life sentence Thursday morning, bound by the jury's verdict.

It was the sixth case in a row since the death penalty was restored in 1976 in which federal prosecutors failed to obtain an execution in this courthouse -- all the more striking this time because the Pentagon is just miles away.

In their successful defense of Moussaoui, his lawyers revealed new levels of pre-attack bungling of intelligence by the FBI and other government agencies. By the trial's end, the defense team was portraying its uncooperative client as a delusional schizophrenic.

They argued he took the witness stand to confess a role in Sept. 11 that he never had -- all to achieve martyrdom through execution or for recognition in history.

They overcame the impact of two dramatic appearances by Moussaoui himself -- first to renounce his four years of denying any involvement in the attacks and then to gloat over the pain of those who lost loved ones.

Using evidence gathered in the largest investigation in U.S. history, prosecutors achieved a preliminary victory last month when the jury ruled Moussaoui's lies to federal agents a month before the attacks made him eligible for the death penalty because they kept agents from discovering some of the hijackers.

But even with heart-rending testimony from nearly four dozen victims and their relatives - testimony that forced some jurors to wipe their eyes -- the jury was not convinced that Moussaoui, who was in jail on Sept. 11, deserved to die.

The case broke new ground in the understanding of Sept. 11 -- releasing to the public the first transcript and playing in court the cockpit tape of United 93's last half hour. The tape captured the sounds of terrorists hijacking the aircraft over Pennsylvania and passengers trying to retake the jet until it crashed in a field.