Accessibility links
Neutrinos: A Cursed Subatomic Particle? An experiment confirms that a weird tribe of particles known as neutrinos actually change from one form into another as they journey about the cosmos. Neutrinos seem to pass through any object. If that's really the case, are neutrinos cursed to wander the universe in solitude forever? 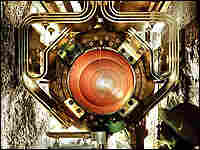 A beam of exotic particles get focused by this device. Eventually the particles decay, producing neutrinos. Peter Ginter hide caption 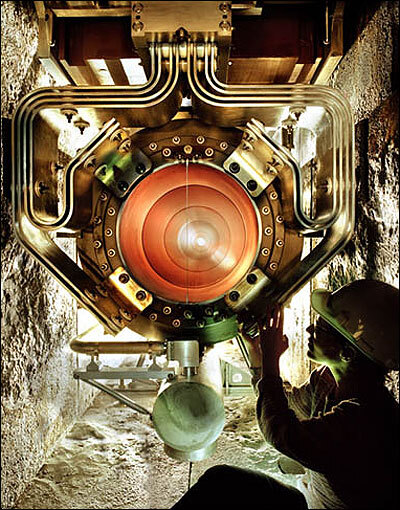 A beam of exotic particles get focused by this device. Eventually the particles decay, producing neutrinos.

An experiment in the Midwest confirms that a weird tribe of particles known as neutrinos actually change from one form into another as they journey about the cosmos. Once neutrinos are made, they pass through just about everything -- including plants, rocks, people and planets -- without leaving a mark. If that's really the case, are neutrinos cursed to wander the universe in solitude, forever?

Pinning Down the Elusive Neutrino 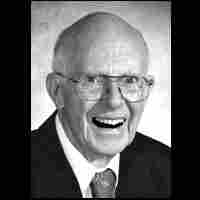 Raymond Davis Jr. won the Nobel Prize in 2002 for helping to figure out how to collect and detect neutrinos. The Nobel Foundation hide caption 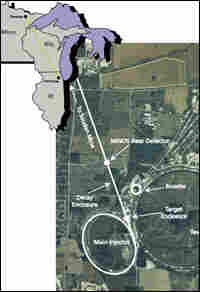 The Main Injector Neutrino Oscillation Search (MINOS) experiment studies the neutrino beam using two detectors, one located at Fermilab and the other in Minnesota, a half-mile underground. MINOS/DOE hide caption 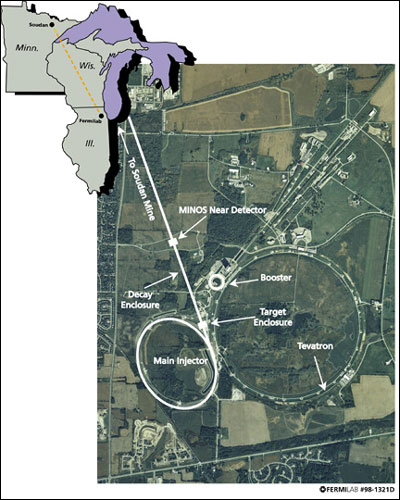 The Main Injector Neutrino Oscillation Search (MINOS) experiment studies the neutrino beam using two detectors, one located at Fermilab and the other in Minnesota, a half-mile underground. 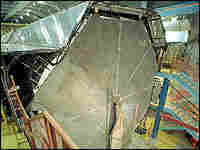 The MINOS far detector is located a half-mile underground in Soudan, Minn. The 100-foot-long far detector consists of 486 octagonal planes, lined up like the slices of a loaf of bread. The experiment expects to record about 1,000 neutrinos per year. MINOS/DOE hide caption 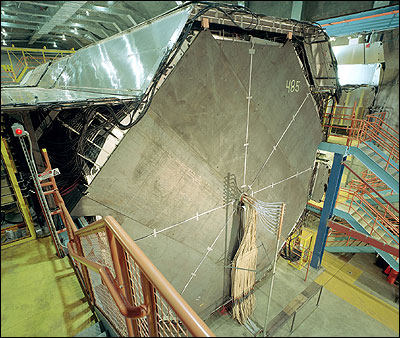 The MINOS far detector is located a half-mile underground in Soudan, Minn. The 100-foot-long far detector consists of 486 octagonal planes, lined up like the slices of a loaf of bread. The experiment expects to record about 1,000 neutrinos per year.

Neutrinos are often referred to as "ghost-like" because they glide through just about everything. John Updike found this sort of thing a little disturbing and wrote a poem, called Cosmic Gall: *

Neutrinos, they are very small.

They have no charge and have no mass

And do not interact at all.

The earth is just a silly ball

To them, through which they simply pass,

Or photons through a sheet of glass.

They snub the most exquisite gas,

Ignore the most substantial wall,

Insult the stallion in his stall,

And, scorning barriers of class,

And painless guillotines, they fall

Down through our heads into the grass.

At night, they enter at Nepal

And pierce the lover and his lass

From underneath the bed -- you call

It wonderful; I call it crass.

This delightful poem probably has a factual error in it, though Updike couldn't have known that when he wrote it. And he might not have cared anyway. The neutrino is not mass-less; it appears now to have a teeny tiny mass. This may seem like a distinction without a difference, but to particle physicists it's one of the most exciting discoveries in the last decade.

The question of whether neutrinos weigh zero or maybe a little more goes back to a strange discovery eight years after Updike wrote his poem. In the late 1960s, physicist Raymond Davis was studying neutrinos coming from the sun. And this was not an easy task. He used a huge tank containing 40,000 liters of cleaning fluid and had to pick out individual atoms that a neutrino had struck and changed.

The weird thing was that about a third of the neutrinos were missing. In other words, when he compared the number of neutrinos he detected, with the number physicists expected to see from the sun, he came up short.

The leading theory to explain the missing neutrinos was that neutrinos had a little mass, which it turns out would allow them to transform themselves as they traveled from one neutrino type to another.

There are three varieties of neutrino, and the math behind why they can change types is complicated. The important part is that Ray Davis' experiment only detected one type. So if some of the neutrinos had changed identities on their way to Earth, that could explain the apparently "missing" neutrinos.

And this appears to be correct. One recent experiment in Canada, at the Sudbury Neutrino Observatory, measured all three types of neutrinos coming from the sun -- and found that the total seemed about right.

The focus recently has been on trying to pin down the details of the neutrino's split personality: How far it travels before it changes from one type into another, and which types change into which and with what frequency.

An experiment in Japan is looking for these answers by sending neutrinos through the Earth and counting them on their way out. A similar experiment in Illinois, called MINOS, announced its first results this month, and their findings pretty much line-up with the Japanese experiment. (If you're feeling brave you can see the results here.)

MINOS will collect more data over the coming years and their precision is expected to improve substantially.

Even More Exotic Than Thought

There are more exotic explanations for the missing neutrinos. It may be that some of them are decaying into a new undiscovered particle, which would be a Nobel Prize-scale discovery. There is even some speculation that some of the neutrinos may be disappearing into other dimensions. Don't believe it? Well, neither do most physicists. In fact, I made a few phone calls and couldn't find one who did.

Everyone prays and waits for something weird to pop up, though. The sad fact is that for a couple of decades, particle-physics experiments have consistently confirmed the reigning model of how matter works, sometimes matching theoretical predictions to many decimal places.

That doesn't make for very interesting conversations at the water cooler: "Yup, nothing surprising again today."

Physicists know that their theory, called the Standard Model, has to crack at some point because the math breaks down if you push it far enough.

The best chance for a breakthrough in particle physics may come at the CERN laboratory in Geneva, Switzerland. A new particle accelerator there is scheduled to begin operation in 2007. The hope is this will lead to a big "theory of everything," after which, presumably, everyone could retire.

* "Cosmic Gall" reprinted with permission from Telephone Poles and Other Poems, by John Updike. (1963 Knopf)