Accessibility links
A Young Man Simulates an Old World Beirut's Zach Condon is only 19, but his music brings to mind sights and sounds from older eras in other places. Created without guitars, Beirut's Gulag Orkestar instead incorporates an orchestra full of mandolins, ukuleles, violins and glockenspiels.

Beirut is the brainchild of Brooklyn-based musician Zach Condon, but his sound is more Prague than Park Slope. And don't be fooled by his weary voice: Condon is only 19. 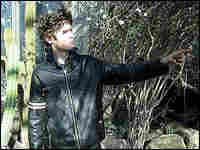 "Mount Wroclai (Idle Days)" lilts and swings in waltz-time -- vibrant and intoxicating. The song functions as a deeply layered soundscape, complete with nooks and crannies that reveal themselves over the course of multiple exposures. An accordion opens the hypnotic, mesmerizing proceedings, as Condon's sultry (and virtually indecipherable) crooning weaves in and out, setting a scene marked by lazy trumpets, playful chimes and unusual percussion that transports listeners to otherworldly places.