Accessibility links
'The Room': A Cult Hit So Bad, It's Good The film The Room revolves around a steamy love triangle filled with lies, betrayal and tragic consequences. But the real draw for audiences is interacting with a cult hit some watch over and over again.

Listen
'The Room': A Cult Hit So Bad, It's Good 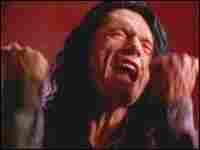 A key scene from The Room: Tommy Wiseau's character confronts his lover. "You are tearing me apart, Lisa!" Wiseau Films hide caption 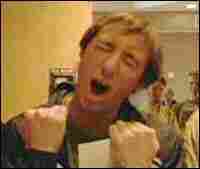 ...and a loyal fan gives his own interpretation of Wiseau after a recent screening in Los Angeles. Wiseau Films hide caption

The Room navigates a steamy love triangle filled with lies, betrayal and tragic consequences. But don't worry too much about the plot -- that's not why people keep coming back for monthly screenings in Los Angeles.

So what's the attraction? The consensus is that the movie is so bad it's actually painfully funny to watch. What makes the experience so much fun are the hundred or so fans that routinely show up for screenings.

During the movie, audience members shout out their own commentary about the dialogue, the sets -- and notably, the framed photograph of a spoon that inexplicably reappears. Each time this happens, plastic spoons are thrown at the screen, in the can-do spirit of Rocky Horror Picture Show fans.

Fans of The Room are cheering a cinematic train wreck. And the film's writer, director and star -- Tommy Wiseau -- even attends some of the screenings.

Wiseau is cagey about where he got the reported $6 million he spent to finance The Room. The mystery has fueled numerous theories. But with so many people buying the DVD, soundtracks and T-shirts, it's easy to see why Wiseau goes along for the ride.

He insists that the whole humor-from-melodrama theme was his intent -- that he wanted to provoke the audience into interacting with the movie.

Is he deluded, or just trying to recast The Room as comedy and not drama? That's not really the point. In Los Angeles, a city filled with screenwriters sitting in cafes typing away at laptops, he has stumbled upon what everyone is searching for: a genuine crowd-pleaser.