When Bobby Lounge played at last year's New Orleans Jazz Fest, he made a powerful impression. Aside from an entrance that recalled Screamin' Jay Hawkins (he was wheeled onstage in a mobile iron lung by a pretty nurse), Lounge reportedly tore up the piano in a style reminiscent of Jerry Lee Lewis. 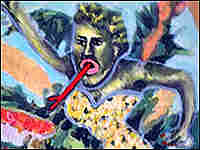 The show was reviewed in Rolling Stone magazine, as well as The New York Times. Yet Lounge had come out of nowhere. And after the show was over, no one seemed to know how to track him down.

Bobby Lounge is, in fact, a pseudonym for a reclusive, middle-aged art teacher from rural Mississippi. His lyrics conjure the weirdness of Southern gothic writing. Reporter Adam Burke visits Lounge in his hometown on the eve of his second appearance at JazzFest.