Accessibility links
Touring America on 12 Meals a Day Jane and Michael Stern travel America's byways and backroads in search of the perfect meal. But they don't look in places with linen napkins and long wine lists. They prefer Mom-and-Pop joints, diners and roadside barbecue stands. 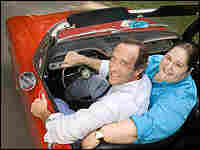 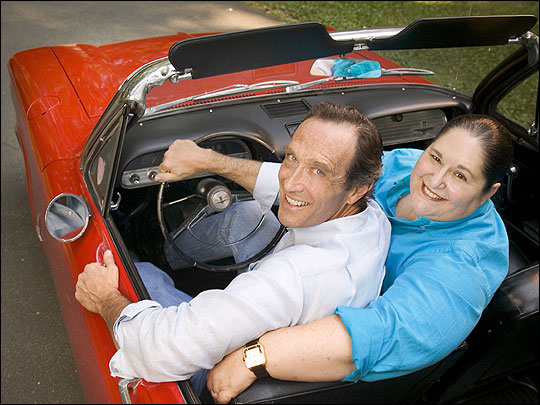 Food writers Jane and Michael Stern travel America's byways in their convertible in search of recipes. 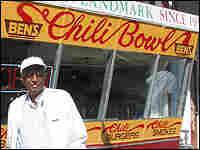 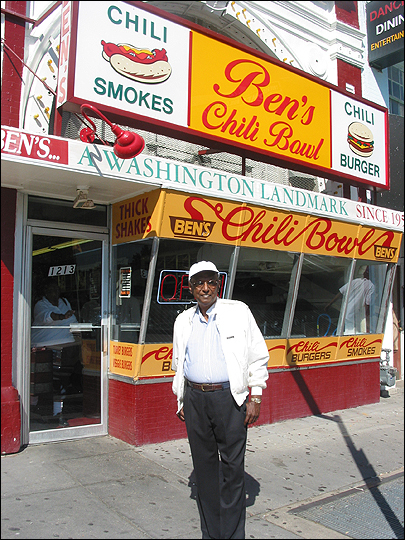 They pen a column in Gourmet magazine, but the husband-and-wife food-critic team Jane and Michael Stern prefer Mom and Pop joints to restaurants with linen napkins and expensive wine lists.

For the past 30 years, they have traveled America's back roads looking for the perfect meal, producing 20 books in addition to the magazine column.

For their latest effort, Two for the Road: Our Love Affair with American Food, the couple covered more than three million miles, sometimes eating 12 times a day as they navigated quirky, out-of-the way kitchens and roadside barbecue stands.

Among their favorite haunts: Ben's Chili Bowl in Washington, D.C. Ben's has served chili hot dogs, half-smokes and cheese fries, among other roadhouse delicacies, since 1958.

Recipes from 'Two for The Road' 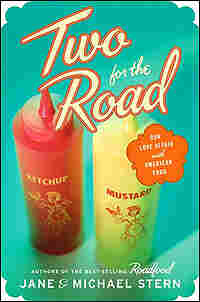 The Sterns make their living writing about their travels with column in Gourmet magazine, and in some twenty books. Two for the Road is their latest effort. hide caption

The first of the women broadcasters at KMA to become known as a radio homemaker was Jessie Young. Jessie was hired in 1926 by Earl May, the station's owner, when she lost her position as a bank teller (the bank failed). Her primary job at KMA was to be singing, but her ability to read commercials persuasively in a down-to-earth manner convinced May that she ought to host her own daily women's program. The "Stitch and Chat Club," which was soon renamed "A Visit with Jessie Young," became the archetype of the radio homemaker show. Jessie discussed the niceties of housekeeping, including cooking and sewing, and also created an easygoing radio companion whom listeners could depend on every day.

The "Stitch and Chat Club" was distinguished by its unabridged authenticity. To underscore Jessie's folksy manner and encourage the audience to consider her an equal, the station ran a transmitting wire from KMA to her home kitchen, and on Saturdays the show featured the comings and goings of her four children and her husband, Floyd, including musical selections on the Novachord, a 1930s-era synthesizer, by son Robert and vocal duets by Jessie and Floyd. Jessie discussed how to make cloverleaf lace and the best way to skim fat from gravy, but she also mused about what she was fixing for supper that night and worried aloud about family problems. She talked about her daughter Eileen, an undernourished child whom she and Floyd had adopted, and she invited her elderly mother, Rosa Susanka, to join her at the microphone and share her maternal wisdom. Shenandoahns well remember Jessie Young's chocolate cake; the recipe was regularly requested via letter and postcard.

TO MAKE THE CAKE: Grease and flour two 9-inch cake pans. Preheat the oven to 375 degrees. Cream the sugar and butter in a large bowl. Stir the cocoa into the boiling water, then combine that with the sugar and butter. Add the remaining cake ingredients one at a time, beating well after each addition. Pour the batter into the cake pans and bake for 30 to 40 minutes, until a sharp knife inserted into the center of the layers comes out clean. Cool the layers in the pans on a cake rack.

TO MAKE THE FILLING: Mix the cocoa, cornstarch, and sugar in a heavy-bottomed saucepan. Beat in the water and cook the mixture over medium heat until it is thick and creamy. Remove from the heat, cool for 10 minutes, and stir in the vanilla.

Turn the cake layers out of the pans and spread the filling on one. Place the second layer on top.Use any desired frosting for the top, but leave the sides unfrosted.

If you are looking for a really big breakfast in Wisconsin or Iowa, find a place that serves hoppel poppel. We first came across this mighty meal-in-a-skillet in Amana, Iowa, at a fine old restaurant called the Ronneburg.We assumed hoppel poppel's name was something that the proprietors' family had invented, and that perhaps the dish was somehow descended from the hearty farm kitchens of their Lutheran Separatist ancestors (who were among the founders of the Amana Colonies in the nineteenth century).

Like slumgullion or cioppino, hoppel poppel is a hodgepodge dish in which eggs are scrambled with potatoes, salami or sausage, onions, peppers, and cheese, and we soon learned that it is not unique to the Lutherans. A few trips later, we were eating our way around the Great Lakes, and one morning after a night-before of planked whitefish with haystack potatoes on the side, we went to Benjamin's Delicatessen in Milwaukee for a nice Jewish breakfast. There again was hoppel poppel, sandwiched on the menu between the corned beef omelet and the fried kreplach (meat dumpling) plate. It was listed as a Benjy's special, and customers had their choice of regular hoppel poppel, which was browned potatoes, salami, and scrambled eggs, or super hoppel poppel, which added green peppers, mushrooms, and melted cheese to the formula.

The main difference between the Amana and Milwaukee versions was the meat. At the Ronneberg, it's bacon. At Benjamin's, all-beef salami is the meat of choice. Scouring our spiral-bound cookbook collection, we have found more recipes for hoppel poppel (sometimes written "hoffel poffel"), plain and super, with bacon and/or sausage, but we have never come across an explanation of why it's called what it is. If anybody knows its genealogy, we'd love to hear about it.

Lightly beat the eggs with the milk and parsley in a medium bowl. Pour them into the skillet over all the other ingredients. Stir occasionally. As the eggs begin to set, sprinkle on the cheese. Cover and cook, without stirring, about 6 more minutes, until the eggs are fully set but still moist. Add salt and pepper to taste. 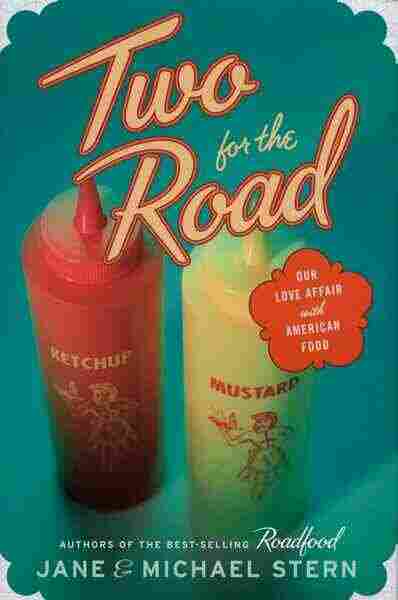 Two for the Road

Our Love Affair With American Food

by Jane Stern and Michael Stern