Accessibility links
Katrina Affects the Sounds of Jazz Fest Music journalist Ashley Kahn shares the sounds of New Orleans Jazz and Heritage Festival. In the final report from this series, Kahn reports on how Hurricane Katrina influenced the lyrics and music of this year's Jazz Fest.

Music journalist Ashley Kahn shares the sounds of New Orleans Jazz and Heritage Festival. In the final report from this series, Kahn reports on how Hurricane Katrina influenced the lyrics and music of this year's Jazz Fest. 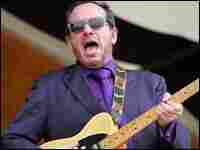 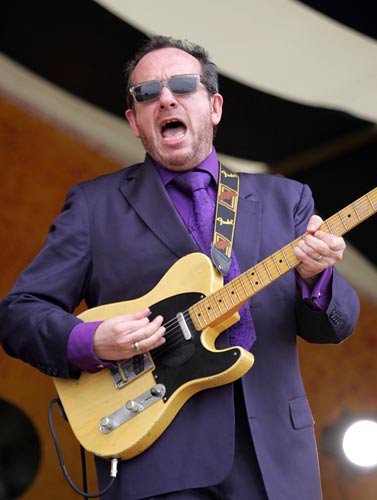 The New Orleans Jazz and Heritage Festival wrapped up last night. It was the first Jazz Fest since Hurricane Katrina -- a fact that added significance to most performances, like this one yesterday from Paul Simon.

YDSTIE: Journalist Ashley Kahn was in New Orleans for the six days of Jazz Fest. He has this report on the music and emotion from the world renowned festival.

For piano legend Dr. John, and countless others here in New Orleans for Jazz Fest this year, nothing was certain until the gates opened on April 28. With the fairgrounds racetrack being shaped to support 10 musical stages and scores of tents, would enough Louisiana musicians be available to perform and would the crowds be here like before?

Unidentified Speaker: Everybody out there who's from New Orleans or from lower Louisiana, put your hand in the air.

Mr. KAHN: Jazz Fest director Quint Davis was one of many whose words were filled with relief on that first day. The relief was shared by the crowds that did arrive from all over the world.

Mr. QUINT DAVIS (Director, 2006 New Orleans Jazz and Heritage Festival): I don't where you came from or how you got here or where you're stayin', but thank you. Welcome back.

Mr. KAHN: Over 300 music groups performed at Jazz Fest this year, more than 90 percent of them from Louisiana. And many were returning to New Orleans for the first time since Katrina, to play the festival.

Mr. BLANCHARD: I don't know 'bout y'all, but I'm sure damn tired of people askin' me, is New Orleans comin' back. God damn right we comin' back, 'cause we don't like y'all food and we hate y'all music.

Mr. KAHN: Emotions were high as almost every local performer spoke out about the recent hurricane. There was gratitude in the gospel tent.

Unidentified Speaker: We, down here in New Orleans, we done been through a whole lot.

Mr. KAHN: There was jubilation from Juvenile, one of New Orleans' leading rappers.

JUVENILE (Rapper): I'm proud to say it's my sixth time at the Jazz Festival. You know what I'm saying? And I'm gonna continue doin' this as long as they invite me cause I love my city. Keep the party goin'.

Mr. KAHN: And there was pride that comes from survival from blues man Luther Kent.

Mr. LUTHER KENT (Blues Singer): Sing out, now (unintelligible). You know what? Ain't no hurricane ever gonna beat this city, all right, baby.

Mr. KENT: Let me make you well aware of that. Because the music'll bring it back every time and that's what New Orleans is known for.

Mr. KAHN: Of course many performers left it to the music to carry their message of Katrina.

Mr. KAHN: Singer and guitarist Anders Osborne slowed it down in a blues tune about a woman and her evil ways.

Mr. ANDERS OSBORNE (Musician): (Singing) Katrina, what have you done?...

Mr. KAHN: And Elvis Costello and legendary composer Allen Toussaint performed their dark ode to Katrina from their new CD.

Mr. ELVIS COSTELLO (Musician): We're gonna do a song from it now called The River in Reverse.

Mr. COSTELLO: (Singing) How long does your promise last? How long can a lie be told?

Mr. KAHN: It's safe to say that because of Katrina, the media coverage of Jazz Fest 2006 was more widespread than ever before, with performers speaking out and letting their feelings flow.

M. COSTELLO: (Singing) Here comes the flood, if you catch my drift. When the things that they promised are not a gift...

Mr. KAHN: Anticipation was especially high to hear what two of the festivals biggest attractions would say or play.

Mr. KAHN: Bob Dylan performed his reworking of an old Delta blues number, High Water Everywhere, which had been composed by Charley Patton after the Mississippi flood of 1927.

Mr. BRUCE SPRINGSTEEN (Musician): We had a chance to travel around from Lake View to the 9th Ward, and I think saw sights I never thought I'd see in an American city. The criminal ineptitude makes you furious and this is...

Mr. KAHN: In a moment that was reported in newspapers and wire services around the country, Bruce Springsteen explained his feelings on Katrina and his musical choice from the past.

Mr. SPRINGSTEEN: This is what happens when people play political games with other people's lives.

Mr. SPRINGSTEEN: This is a song by a fellow named Blind Alfred Reed. He recorded it a week after the stock market crash that presaged the Great Depression.

Mr. SPRINGSTEEN: (Singing) Well, the doctor comes around here with his face so bright. And he says in a little while you'll be alright. But all he gives is a humble pill, a dose of dope and a great big bill. Tell me, how can a poor man stand such times and live?

Mr. BLIND ALFRED REED (Singer, Songwriter): (Singing) Tell me, how can a poor man stand such times and live?

Mr. KAHN: It was surprising that Springsteen and Dylan, who are both celebrated songwriters in their own right, reached into history to find a way to comment on a current event. But in New Orleans the idea of finding modern relevance in traditional music is an everyday thing. Here's Troy Andrews, better known as Trombone Shorty, at Jazz Fest.

Mr. ANDREWS: And we gonna put a little twist on it...

Mr. KAHN: Jazz Fest marked a triumphant return this year, but it was also another step in a long rebuilding process. The effects of Katrina were hard to miss. While I was waiting to hear piano player Jonathan Batiste one evening in a local club last week, the power suddenly went out in the surrounding neighborhood, silencing the music for a moment once again.

YDSTIE: Ashley Kahn is author of The House That Trane Built: The Story of Impulse Records. It's to be published next month. MSN video and WWOZ in New Orleans contributed material for this report.