Accessibility links
Filipino Families Divided by Distance, Economics The most remarkable thing about reporting a story on a divided Filipino family is how unremarkable it is in the Philippines. As the Lobo family told me over dinner in Sacramento, human labor is pretty much the country's main export, an economic crutch it has come to rely on despite the hardships this mass migration imposes on its citizens. 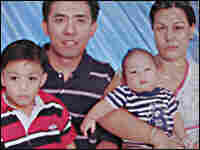 The most remarkable thing about reporting a story on a divided Filipino family is how unremarkable such a situation is in the Philippines. As the Lobo family told me over dinner in Sacramento, human labor is the country's main export, an economic crutch it has come to rely on despite the hardships this mass migration imposes on its citizens.

Filipino emigration to America actually began at the turn of the last century, according to Ricardo Jose, a history professor at the University of the Philippines. During the "yellow peril," amid fears over the arrival of Chinese, Japanese, and Koreans into the Western states, U.S. companies recruited workers from this American territory as a "safer" alternative. After the Philippines' supportive role in World War II, many Filipinos were also promised U.S. citizenship, and that boosted migration. But in the 1970s, exporting its own people became the Philippines' official national economic policy.

Professor Jose says the regime of Ferdinand Marcos saw the emigration of workers as a short-term solution to high unemployment. And the remittances these workers sent home helped provide scarce foreign exchange.

"But as people saw the benefits of working abroad," Jose says, "people's views were that it's better to stay abroad than work here for a pittance."

Today, about one in 10 Filipinos works abroad, and the government touts the export of jobs with pride. During my visit, a big billboard in downtown Manila advertised a job fair at the city's World Trade Center -- "Jobs for all Philippinos [sic]." An entire government ministry helps coordinate the effort to place people with foreign firms. Overseas Foreign Workers -- or "OFWs" as they are known in the Philippines -- get tax breaks and a special line at Manila's International Airport. According to Dean Yang, of the University of Michigan, most overseas contract workers are not allowed to bring family members with them.

Economically speaking, the system is working. Today OFWs live not just in the United States but also in Japan, other parts of Asia, and throughout the Middle East. The United Nations recently reported that in 2004, Filipinos working abroad sent $11.6 billion in remittances back home. Researchers note the money is often used to pay for children's schooling and make other investments that improve quality of life. But you don't have to be in the Philippines long to feel the social toll that this policy of exporting labor also exacts.

A high-school teacher I met worried that her entire class seems to want to go overseas. She finds this depressing, and a sign that Filipinos lack pride in their own country. At the University of the Philippines, the psychology department has begun studying the social impact of having so many families separated for so long.

Some of the saddest stories are of the many Filipino women who leave their own children behind to become nannies in other countries. There's one on my street in Washington, D.C. She is unfailingly cheerful. But when I mentioned my trip to her home country, she confided for the first time how many nights she's spent crying. She's been in the United States nearly 10 years, leaving her two children in the care of her husband. He's a rice farmer, and the price he is paid for his crop simply cannot support a family. But she has trouble conveying this to her teenage son. He recently lashed out over the phone, telling her how hard it's been without a mother in the house.

On my flight out of the Philippines, as the plane started its descent toward San Francisco, the woman next to me asked where I lived and where I was going. But when I asked the same, she dissolved into tears. She'd just said goodbye to her 2-year-old son and would not see him for the next eight months. She and her husband both work for a holiday cruise ship based out of Puerto Rico. The job is eight months on, two off, then back on again. Her mother is raising their child.

Professor Jose says the policy of exporting people also takes an economic toll. Some people eventually can join family members abroad, and this produces a whole segment of society living in limbo. "It's unhealthy," he says. "You can't really do much productive on a long-term basis here, because you should be able to drop it on a moment's notice once the embassy calls" with your visa. He hopes the government will one day stop promoting overseas workers and instead foster self-sufficiency, but he realizes it's easier said than done.

In the meantime, young Filipinos continue to prepare themselves for lives abroad. The latest buzz among business students? If you want to be an entrepreneur in the U.S., you should study Spanish.