Accessibility links
Beyond the Grave, a Morbid Tale Unearthed shortly after Johnny Cash's death, a batch of recordings marked "Personal File" turned out to contain an assortment of unreleased songs — including a standout moment in which Cash reads the riveting, darkly funny Robert W. Service poem "The Cremation of Sam McGee."

Beyond the Grave, a Morbid Tale

Beyond the Grave, a Morbid Tale

The Cremation of Sam McGee [#]

A relentlessly prolific performer, Johnny Cash recorded stacks of unreleased tapes during his legendary career. Unearthed shortly after Cash's 2003 death, a batch of recordings marked "Personal File" turned out to contain an assortment of songs -- hymns, covers, tributes to family friends, and more -- that Cash had recorded solo and acoustic sometime in the '70s. 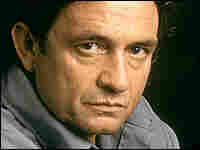 Forty-nine of those tracks have been compiled on a two-disc set titled Personal File, and the joy of the collection lies in its affable straightforwardness, as Cash calmly but solemnly introduces the occasional song with a plainspoken anecdote about its origin. Personal File works best as a cumulative experience, but its standout moment finds Cash reading the riveting, darkly funny Robert W. Service poem "The Cremation of Sam McGee."

Service's early-20th-century gem -- the story of an ill-fated Yukon gold-miner and the fate of his last remains -- finds its match in Cash, who lends "The Cremation of Sam McGee" the gravitas it requires. Personal File benefits immeasurably from Cash's spoken-word song introductions, so it makes sense that its finest moment highlights his enormous talents as a speaker. It's virtually impossible not to hang on his every word.