Accessibility links
Mother's Day: Say 'I Love You' with Chocolate Peanut butter and chocolate belong together like moms and their kids, says food writer Betsy Block. Best of all, peanut butter cups are easy enough for kids to make by themselves (or maybe with one helpful adult sous chef nearby).

Mother's Day: Say 'I Love You' with Chocolate

Mother's Day: Say 'I Love You' with Chocolate 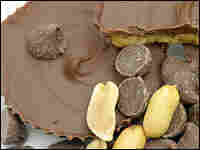 Who needs H.B. Reese when making your own peanut butter cups is so easy? Scroll down for recipe. Andrew Pockrose hide caption 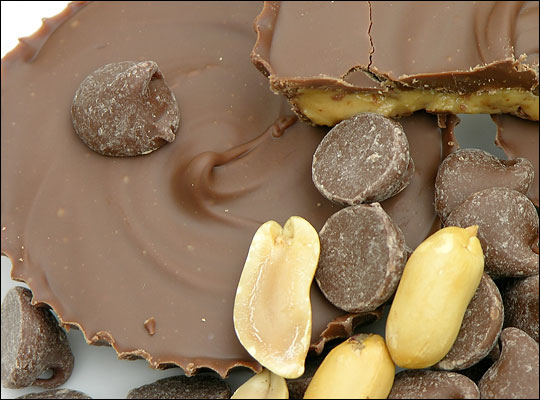 Who needs H.B. Reese when making your own peanut butter cups is so easy? Scroll down for recipe. 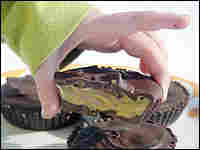 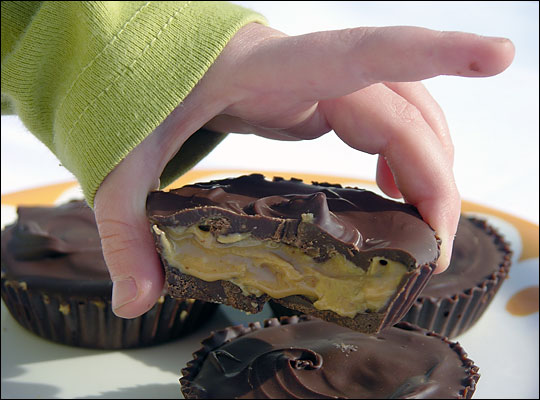 Little hands can make homemade peanut butter cups (but maybe not this little).

A recent survey of moms at a Boston area playground revealed that 110 percent of them love chocolate. (Extra points were awarded for self-proclaimed "addicts.") So it's a fair bet that most moms would be happy to get some candy along with their bouquets on Mother's Day.

That should come as no surprise, considering that not only is it chocolate -- you know, chocolate -- but also that it's said to promote both euphoria and calm. Both euphoria and calm? And it's legal? No wonder it makes otherwise regular people sound like fanatics, and we haven't even mentioned its healthful antioxidants -- or the caffeine. The bottom line is that, chemically speaking, chocolate equals love and happiness. It's perfect for exhausted moms.

But wait, the story only gets better, because while chocolate is good -- OK, chocolate is great -- we're also going to consider one of its cohorts, peanuts.

More than a billion pounds of peanuts are consumed in the United States each year, about half in the form of peanut butter, according to the National Peanut Board, which represents peanut farmers.

Peanuts were first grown in pre-Inca times in Peru, then made their way around the world. Today, ground peanuts are made into sauces in Indonesia and Malaysia and mixed into stews in West Africa, not to mention slathered on bread and packed in millions of American children's lunchboxes.

Stews, sauces, sandwiches -- it's all good. Still, it's hard to believe that with all the other amazing discoveries throughout the millennia, it took until the 1920s to figure out that chocolate and peanut butter belong together. We have one Harry Burnett Reese to thank for finally making the connection.

H.B. Reese was born in 1879 on a farm in Frosty Hill, Penn., and worked for the Hershey's Food Corp. Inspired by the success of his employer as well as by his distaste for farming, Reese decided to give the candy industry a shot. By the mid-1950s, his peanut butter cups were so popular they needed their own factory. By the 1960s, Hershey had bought him out.

The marriage of mood-enhancing chocolate with healthful peanut butter was clearly a match made in heaven. Indeed, it's already lasted more than three-quarters of a century and, according to Hershey's, it's the top-selling candy in America.

And while Hershey's has been messing around with the recipe lately -- coating some cups in white chocolate, adding caramel to others -- as usual, simplicity is beauty. White chocolate and caramel both deserve attention, but not here. Not now. Please, not in our peanut butter cups.

Because peanut butter and chocolate belong together like -- well, like moms and their kids. Think about it: Peanut butter cups start with what many tired moms consider a staple food -- chocolate. This is then used to surround -- to hug, if you will -- the most ubiquitous children's food of our times. Best of all, they're easy enough for kids to make by themselves (or maybe with one helpful adult sous chef nearby), thereby completing the mother-child circle of love.

My 10-year-old son has been trying to make peanut butter cups for years now, but he always "fails" because the chocolate gets too soft once he takes the cups out of the fridge. (Of course, his failures have been some of my all-time favorite candies.) He'll be happy to learn that this is because he hasn't tempered the chocolate, a complicated procedure if ever there were one, and definitely not worth getting worked up over.

This recipe takes care of the problem. Somehow, the process of heating (in the microwave) and then cooling (by stirring at regular intervals) seems to stabilize the chocolate, if not temper it. And even if it didn't, even if the peanut butter cups were to get a little melted, I ask you, would that be so bad?

1 cup creamy peanut butter (if you use "natural," which means it has nothing added, you'll have to stir the oil in first)

1 bag chocolate chips (I used Ghiradelli, whose bags oddly weigh 11.5 ounces, but most brands offer 12-ounce bags. Milk chocolate is softest and tastes most like Reese's)

12 paper muffin cups, halved (so they're only half as high)

Stir the powdered sugar into the peanut butter. The amount you use will depend on how runny your peanut butter is and on how stiff or gooey you want the inside of your cups to be. (More sugar makes it stiffer; less keeps it gooey.) Stir in a couple of tablespoons of sugar at a time; once you have the texture you're looking for, set this mixture aside.

Microwave three-quarters of the chocolate chips at one-minute intervals, stirring after each minute until it's warm enough that it will melt if you stir it for another minute. This should take about three minutes. Then add in the last quarter of the chips and stir until they're melted.

Spread the chocolate over the bottom and sides of the halved muffin papers, making sure to cover all the paper. This tends to get a little messy, but there are worse things than getting chocolate on your fingers, right? Put the paper cups in a muffin tin so they'll harden in the right shape. Freeze the chocolate-coated papers in the muffin tin for 5 minutes.

Take them out of the freezer and spoon the peanut butter mixture into the chocolate cups, spreading it around so it covers the bottom of the cups but still leaves enough space for the top coating of chocolate.

Use the rest of the melted chocolate to cover completely.

Store in the fridge. Once they're set, peel off the muffin paper.

Serve at room temperature so they're soft and luscious.