Accessibility links
Psychedelic Furs' Butler Steps Out for Solo Album : World Cafe Richard Butler was lead singer of the U.K. new wave band the Psychedelic Furs from 1977 until they disbanded in 1991. Butler went on to form the band Love Spit Love, and has now released his first self-titled solo album.

Richard Butler's gravelly, British-inflected vocals became familiar to listeners on '80s hits such as "Love My Way" and the title song to the movie Pretty in Pink. As the lead singer of new wave/punk band The Psychedelic Furs, Butler released seven albums on Columbia Records -- and there are plans for an eighth full-length release sometime next year. 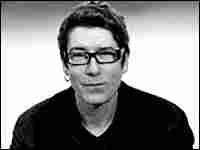 Besides his work with the Furs, Butler formed a post-grunge band in 1994 called Love Spit Love, which recorded two albums and whose cover of The Smiths' "How Soon Is Now" is the title song the WB show Charmed.

Butler's new self-titled album is his most personal and emotional, and is his first solo project. The album's sound is melodic and a stark contrast to his work with the Furs and Love Spit Love. Butler's trademark laryngitic voice sounds different too, with a smoother and more prominent place in the mix.

Butler talks about making his first solo record, his hobby of painting and how the tone of his record was influenced by recent life events.