A letter from Iran's president to President Bush overshadows Secretary of State Condoleezza Rice's meetings in New York with senior diplomats from France, Britain, Germany, Russia and China. Rice dismissed the letter as a diversionary tactic.

"This letter is not the place that one would find an opening to engage on the nuclear issue or anything of the sort," Rice said in an interview with The Associated Press. "It isn't addressing the issues that we're dealing with in a concrete way."

The following are excerpts from a letter sent by Iranian President Mahmoud Ahmadinejad to President Bush. The White House received it Monday through the Swiss Embassy in Tehran. 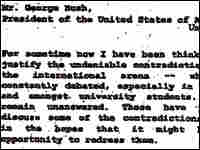 "Of course Saddam was a murderous dictator. But the war was not waged to topple him, the announced goal of the war was to find and destroy weapons of mass destruction. He was toppled along the way towards another goal; nevertheless the people of the region are happy about it. I point out that throughout the many years of the imposed war on Iran Saddam was supported by the West."

"Why is it that any technological and scientific achievement reached in the Middle East region is translated into and portrayed as a threat to the Zionist regime? Is not scientific R&D one of the basic rights of nations?"

"Can the possibility of scientific achievements being utilized for military purposes be reason enough to oppose science and technology altogether?"

"Lies were told in the Iraqi matter. What was the result? I have no doubt that telling lies is reprehensible in any culture, and you do not like to be lied to."

"Those in power have a specific time in office and do not rule indefinitely, but their names will be recorded in history and will be constantly judged in the immediate and distant futures."

"How much longer will the blood of the innocent men, women and children be spilled on the streets, and people's houses destroyed over their heads? Are you pleased with the current condition of the world? Do you think present policies can continue?"

"History tells us that repressive and cruel governments do not survive. God has entrusted the fate of men to them."

"Can one deny the signs of change in the world today? Is the situation of the world today comparable to that of 10 years ago? Changes happen fast and come at a furious pace."

"Liberalism and Western-style democracy have not been able to help realize the ideals of humanity. Today these two concepts have failed. Those with insight can already hear the sounds of the shattering and fall of the ideology and thoughts of the liberal democratic systems."