Accessibility links
What Are You? Life as a Bi-Racial American Commentator Angela Nissel, author of Mixed: My Life in Black and White, has some suggestions for how to respond when people with a mixed ethnic background are asked about their heritage.

Listen
What Are You? Life as a Bi-Racial American

Commentator Angela Nissel, author of Mixed: My Life in Black and White, has some suggestions for how to respond when people with a mixed ethnic background are asked about their heritage.

Any child of immigrants can tell you that here, in the U.S., folks have a need to know your nationality. Are you Mexican-American, Irish-American, Japanese-American? But when that hyphenated phrase includes race, not just the country you or your parents or your grandparents came from, things can get a little trickier.

Commentator Angela Nissel is the author of a new memoir, Mixed: My Life in Black and White.

Ms. ANGELA NISSEL (Author, “Mixed: My Life in Black and White”): What are you? As a bi-racial person with facial features that could come from any number of countries, I'm used to this question.

It used to upset me. I'd use it as an opportunity to practice my fiction skills. When a businessman with argyle socks asked what I was, I replied, Argylian. I ended up having a long conversation about how unspoiled the Isle of Argyle was, and how there was even undiscovered gold in the rainforest.

While it was fun imagining that man trying to cash in his frequent flyer miles to a land that didn't exist, the more mature part of me wondered if I was the only person who thought the question--what are you?--was rude. Now that I'm older, I think that many Americans become tongue-tied when it comes to race, and that uneasiness is multiplied when talking to someone whose race they can't discern.

I don't want people to stop asking questions, so I've put together a tip sheet for conversing with ethnically vague people.

If you're curious about a person's ethnicity, there are several ways to express that other than asking, what are you? Ask me if I speak Spanish. Ask me if my last family get-together was a barbeque or a bar mitzvah. Anything but, what are you?

What are you, should only be asked if you're approached by green men who floated to your doorstep in a hovercraft.

On the flip side, do not assume that you know the race of the person you're speaking to. I have a friend who looks like he could be of Middle Eastern descent. After 9-11, people constantly asked him if he sided with the terrorists. Unfortunately, it didn't help matters that he was a hip guy who always referred to nice things as being the bomb.

Try to avoid the word mulatto. It comes from the Spanish word for mule and most people find it derogatory. There is a word that's okay to use, Moolatte. That's a light brown drink sold at Dairy Queen.

Let's say Mariah Carey wants you to take her to Dairy Queen. You'd be taking a bi-racial person out to get Moolattes. Got it? Good.

Do not assume we're the head of the Tiger Woods fan club or know how to get in touch with him. Don't ask your half-black co-worker if she'll be taking a half-day off for Martin Luther King Day. She's heard that joke before. Ditto for assuming that she likes half-and-half in her coffee or that she drives a hybrid.

Most importantly, remember not to be afraid to ask questions. If you accidentally offend anyone, there's no better person to do it to then a multi-racial person. We're usually really nice about it. We realize we're probably related to you.

MONTAGNE: Commentator Angela Nissel is a writer and consulting producer on the television show, Scrubs. 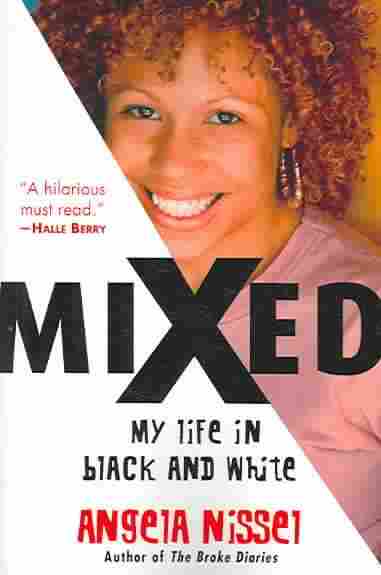 My Life in Black And White