Accessibility links
A Family's Wait for U.S. Visas Spans Generations Many of those waiting to immigrate to the United States legally are hoping to join relatives already in America. But the system is so overwhelmed that some families, like the Lobos of the Philippines, end up being divided for years while they wait for visas to become available. 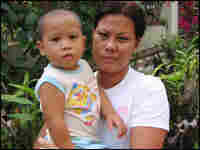 Ana Sanchez Lobo stands outside her house with her 17-month-old son, Tristan. He was born during one of his father's visits home to the Philippines. Jennifer Ludden, NPR hide caption 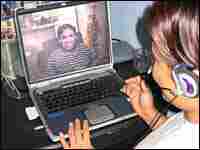 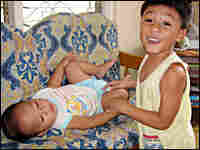 Patrick Lobo, 5, plays with his younger brother, Tristan. Patrick briefly lived with his father, Ramon, in California, but was sent back to the live in the Philippines so that he could spend his days with his mother instead of in a U.S. daycare. Jennifer Ludden, NPR hide caption

The most remarkable thing about reporting a story on a divided Filipino family like the Lobos is how unremarkable it is in the Philippines. Human labor has become one of the country's main exports, an economic crutch it has come to rely on despite the hardships this mass migration imposes on its citizens.

NPR's Jennifer Ludden reflects on the Filipino culture of overseas work in a Reporter's Notebook for NPR.org:

The United States admits nearly 1 million legal immigrants a year. Yet that's nowhere near the number of people who want to come. The vast majority of visas are for those joining family members. The system is so overwhelmed that families end up being divided for years while they wait for visas to become available.

Legislation in the Senate aims to cut these wait times by letting in many more legal immigrants each year. But there's been virtually no debate on that measure, as Congress focuses on illegal immigrants.

The Lobo family knows how long the wait can last. This Filipino family has endured two generations of separation to come to America.

But Ramon Lobo couldn't join the rest of his family. Just as the Lobos' visas came through, Ramon, the eldest child, turned 21. That put him in a different category, with a much longer wait for a visa. After agonizing, Ramon Lobo's parents and two younger siblings moved to California, leaving Ramon behind in the family house.

Ramon Lobo and his parents thought it would be two or three years until his visa came through. But the wait stretched to nine years. And the separation was all the more difficult because U.S. law does not allow relatives abroad to even visit family in the United States once they've petitioned to live permanently in the United States. They are presumed to be at high risk for overstaying their visa. Even when Lobo's mother became ill with cancer, he was denied permission to visit her.

Lobo's permanent visa finally came through in 2003. He now lives with his family in Sacramento, in a tidy neighborhood of beige stucco ramblers, and works at the Department of Motor Vehicles. But Lobo also left his own family behind. By the time his visa came through, he and his longtime girlfriend, Ana, had had a 2-year-old boy, Patrick. He married Ana after his visa came through, but left her and his son behind to move to the United States.

Lobo has applied for his wife to join him in America. But for now, the couple communicates through a Web cam connection over the Internet. Also joining the conversation is Patrick, now 5, and Tristan, Ramon and Ana's 17-month-old son, who was conceived on one of his father's visits home to the Philippines.

Lobo talks about the cute things his baby son, Tristan, is doing now: dancing to the music on TV, trying to sing in church. Given that he's only flown back home twice in the past two-and-a-half years, he knows an impressive amount of detail about his children's daily lives. But to his great sadness, 5-year-old Patrick rarely wants to chat with him on the computer.

"It's hard sometimes," Lobo says. "But I guess it's his way of coping with it. It's like, you don't really miss somebody if you don't -- try not to talk to him too much."

When Lobo first came to California, he brought Patrick with him. As a dependent, Patrick got traveling papers right away. But Lobo soon decided it was better for the child to be with his mother than in daycare while he worked. So a few months later, he took Patrick back to the Philippines. Thinking of it, Lobo's shoulders slump, and he pulls a blue striped handkerchief from his back pocket. He says he'll never be able to forget the end of that trip, when he left his son at the airport.

"The look on his face was the hard [part] to see," Lobo says. "You know the look on the kid, he's expecting that he's coming with me. Then, he started crying when I gave him to my wife."

Lobo says he could barely make himself get on the plane. But he just kept thinking: There is no future for us in the Philippines.

Ana Sanchez Lobo and her sons live in Ramon's parent's home, about an hour north of Manila, along with one of her uncles and a housemaid. Old Lobo family portraits from when Ramon was a child still hang on the walls.

For all their distance, Ramon and Ana Lobo keep up the mundane chit chat of married life through their regular Web cam sessions.

She tells him about a movie he should see -- "You'll go back to being a teenager," she says. She sees her sister-in-law on the Web cam and asks if she's lost weight.

While Ramon has battled loneliness in America, Ana has had to navigate some cultural pitfalls. When she became pregnant the first time, the two could not marry -- that would have forced Ramon to start his visa process all over. But the Philippines is deeply Catholic. So, they faked a wedding. They bought rings. Ramon faked a wedding photo on his computer. Even their closest relatives didn't know.

But Sanchez Lobo was a nurse at the time, and that was a problem. Nurses in the Philippines sign an oath to be role models. The hospital kept asking to see her marriage certificate. She quit her job. Now, she lives on the money Ramon sends from California.

Ana, Ramon and their children have lived this separated family life for two-and-a-half years. And according to the visa bulletin the U.S. government sends out each month, the wait could be another four years. Sanchez Lobo says the hardest part is explaining it all to Patrick. She focuses on Ramon's next visit, in December. But Patrick can't grasp how far away that is.

In the front courtyard, Ana shoots a video of the boys playing so that Ramon will have a record of some of what he's missing.

Ramon Lobo thinks the United States should be more flexible with families. He wonders why loved ones can't wait together in America while visas are being processed. He points out the economics. Just think of the millions of dollars he and others send to their families overseas, instead of spending it in the United States. More importantly, he worries about the social cost.

"A family is the foundation for any country," Lobo says. "If you have bad families, you won't produce good citizens."

Ramon Lobo's parents had hoped to welcome the rest of their family to the United States. But recently, his mother died of her cancer.

Now, Ramon and Ana are planning out his next visit to the Philippines. He'll stay three or four weeks.

"Any longer would make it harder to leave," Lobo says. "This way, they won't really get used to my being there. It'll be just like a dream."