Accessibility links
Hushed Pop That Spans Continents Jose Gonzalez was born in Sweden to Argentine parents and raised on bossa nova and Joy Division. Haunting and ominous yet seductively heartening, "Heartbeats" finds him reworking a song originally performed by the Swedish electro-pop band The Knife.

Born in Sweden to Argentine parents and raised on bossa nova and Joy Division, Jose Gonzalez makes music that's haunting and ominous, yet seductively heartening. Hailed by music bloggers in much the same manner as Clap Your Hands Say Yeah and Tapes 'N Tapes, the singer-songwriter has attracted praise that's significantly louder than his music. 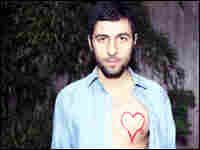 Jose Gonzalez wears his heart on his sleeve, among other places. Leslie Lyons hide caption

On "Heartbeats," Gonzalez reworks a song originally performed by the Swedish electro-pop band The Knife. It's the only cover version on his achingly intimate debut album, Veneer, which pairs Gonzalezs acoustic-guitar work -- a style that merges classical and Brazilian techniques with the folk style of Nick Drake and Bert Jansch -- with his hushed, fragile tenor.

"We had a promise made, we were in love," Gonzalez sings with melancholy resignation. His sparse bossa-folk resonates on an intensely personal level: If it were performed in the middle of a crowd of thousands, it would still seem crafted for an audience of one.