Read an Excerpt from 'The Joy of Doing Things Badly' at RandomHouse.com

Veronica Chambers has done many things well, including writing successful fiction and non fiction works. In her latest book, The Joy of Doing Things Badly: A Girl's Guide to Love, Life and Foolish Bravery, she outlines why it's a good thing to push your limits.

She tells NPR's Farai Chideya how this book is different from all her others.

Ms. VERONICA CHAMBERS, (Author, The Joy of Doing Things Badly: A Girl's Guide to Love, Life and Foolish Bravery): I think, in a lot of ways, this was the most personal book I've written in a long time; which I didn't realize, because it sort of started out with this kind of fun thing, the joy of doing things badly. And I talk about all these things that I do badly, like try to pick up guys and sing and dance and--you name it.

And then, once you kind of get underneath it, you realize there's a lot of insecurity and fear that keeps us from doing things. So, in some ways, it's a really fun book, but it's also really personal and honest. And I felt a little vulnerable.

Absolutely. You are married, you happen to be on a fellowship that has taken you to France.

CHIDEYA: You seem to be living, what many people would consider, a dream life.

CHIDEYA: Do you feel that way?

Ms. CHAMBERS: I do, now. I mean, it's been a great year. And I think--you know, I always think about that thing that Zora Neale Hurston said, there are years that ask questions and there are years that answer them. You know, I think that, in some ways, when I was writing this book and I was thinking of all the things that I did badly and all these dreams and hopes that I had, I was asking a lot of questions. And I think this was a year with a lot of answers. So I'm very happy for that.

CHIDEYA: Let's go through some of the experiences that you talk about. Singing--you mentioned that you don't sing well. You were called out by a preacher, tell us about that.

Ms. CHAMBERS: Oh, because I have a really, really wretched singing voice. And, you know, it's one of those things where everyone goes, oh, it's not so bad. And then you sing Happy Birthday next to them and they're like, oh, girl, next time, you know, hum.

So I was in church one day and I had just stopped signing, because it was kind of an issue. And people around me were noticing and I was really self-conscious. And the minister came up to me and he said, why aren't you signing? And I said, I don't sing, because I have a really bad voice. And he said, do you think God cares?

CHIDEYA: You're work has been published in many different magazines and newspapers. And in The New York Times, you had a whole piece about finding love. Tell us a little bit about what you wrote about there and what you're search for your partner taught you.

Ms. CHAMBERS: The piece that I wrote for The New York Times really was about how--I always thought that to get married you had to date well. You went out on some dates, you had a long-term relationship and then the person proposed. And I didn't. You know, I dated kind of badly. I dated people who, you know, weren't very nice all the time. I dated guys who I gave way too much credit--the usual stuff.

And then sort of out of nowhere, I met the guy who would become my husband. And all of a sudden, I realized, you know what, all those guys who weren't that in to me--you know, to paraphrase that book, He's Just Not That Into You--they did me a huge favor, because they didn't stick around long enough to ruin my chances of meeting someone else. And so I had this whole new perspective on it.

CHIDEYA: I want to go back and talk a little bit about your writing career...

CHIDEYA: ...because you have done both fiction and non-fiction.

CHIDEYA: When Did You Stop Loving Me, a novel about a girl coming of age under very difficult circumstances.

CHIDEYA: And then, Momma's Girl, about your own coming of age.

CHIDEYA: What was the spark that first got you writing? Why did you assume, at some point, that, I can do this, I can be a writer, I can be published, I can talk to other people?

Ms. CHAMBERS: Well, for me it was really--I started in college when I was tutoring a girl in Spanish who wrote for YM magazine. And it was really just meeting a writer. You know, I think it's the most powerful thing in the world, to meet someone who's actually doing what you're doing. For me, that was the spark.

Ms. CHAMBERS: I don't know. I mean, I think on bad days, I think, it's nothing but rejection, you know. I have this amazing fellowship in France. And I have another one coming up in the fall in Italy. And so it's been a banner year...

CHIDEYA: Put me in your suitcase.

Ms. CHAMBERS: I know. But I also didn't get 10 other fellowships. And so it's constant rejection. One book or article represents 10 or 12 or 15 rejections. So there's that, which is the tough side. And the great side is that you get to create and you get to sort of have your say and have fun with it. And I think that's the best kind of work I can imagine doing.

CHIDEYA: Who are you speaking to in this book? Who's your perceived audience? And have you gotten any feedback yet from your readers?

Ms. CHAMBERS: I called it A Girl's Guide to Love, Life and Foolish Bravery. And then the funny thing, of course, is hearing from guys and hearing that they're insecure. You know, there was this guy at my reading in New York--50-year-old white guys, you know. And it turns out he'd read the book and knew--was quoting things from page numbers. I don't even remember the page numbers. And so it's been a powerful reminder to me that men are as insecure and vulnerable as we can be as women.

CHIDEYA: If you had to distill the essence of this book into a sentence or phrase, or a bit of advice, what would it be?

CHIDEYA: Veronica, thank you so much.

Ms. CHAMBERS: Thanks for having me.

GORDON: That was NPR's Farai Chideya talking with Veronica Chambers, author of The Joy of Doing Things Badly: A Girl's Guide to Love, Life and Foolish Bravery. 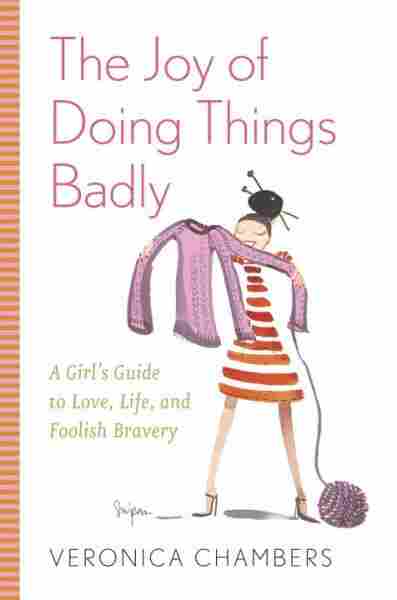 The Joy of Doing Things Badly

A Girl's Guide to Love, Life and Foolish Bravery