Accessibility links
Celebrating Beloved Bilko's Shenanigans Sergeant Bilko cheated and conned officers and underlings alike -- and TV audiences loved him. The producer of a new DVD set of The Phil Silvers Show, aka "Segeant Bilko," explains what made the 1950s show so beloved. 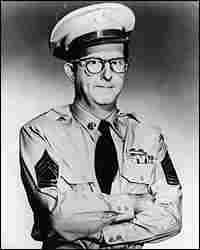 Fifty years ago, American television viewers fell in love with Sergeant Bilko, a sneaky character who cheated his fellow noncommissioned officers, roiled the brass and conned his underlings at Fort Baxter in Kansas.

The Phil Silvers Show -- originally titled You'll Never Get Rich but commonly referred to as "Sergeant Bilko" -- ran on CBS from 1955 to 1959. Its star was Silvers, a middle-aged, balding, loud comedian with thick glasses.

Paul Brownstein has produced a 3-DVD collection of The Phil Silvers Show that is being released this week. He talks to Robert Siegel about the conniving but beloved character and the show, which is remembered still for the quality of its writing and acting.

'The Phil Silvers Show' at the Museum of Broadcast Communications