Accessibility links
Let the Summer of Sound Team Begin Every summer has that album: one that defines the season while hearkening back to the mysteries and epiphanies of summers past. The newest incarnation may well be the work of Sound Team, which transforms indie-rock into a meatier, more inventive genre.

Every summer has that album: one that defines the season while hearkening back to the mysteries and epiphanies of summers past. This year's incarnation may well be the work of a band called Sound Team. 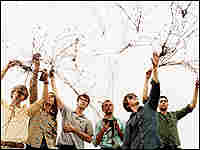 Sound Team makes a push to define the summer of 2006, at least musically. hide caption

Like fellow Texas bands Spoon, Voxtrot and And You Will Know Us by the Trail of Dead, Sound Team possesses a do-it-yourself ethos that has helped transform run-of-the-mill indie-rock into a meatier, more inventive and experimental genre. Sound Teams self-released debut EP, Work, won the affection of many critics last year, and a full-length big-label follow-up has attracted anxious anticipation from fans who fear a shift to a more commercial sound.

No worries there. Though producer Mike McCarthy polishes up the bands fuzzy rough edges, the forthcoming Movie Monster sounds both danceable and dark, with sharp melodies residing amid layers of atypical arrangements -- each song a little sonic collage. Born to Please ranks atop the list of songs most likely to take hold, and its likely to survive dozens of spins without getting tired. At least until autumn comes around again.