Accessibility links
Broadening the Reach of Broadband As people get more of their entertainment from the Internet, the amount of data flowing in and out of the house is going to grow. Telecommunications companies and communities are looking for ways to make "broadband" even broader -- and more affordable.

Listen
Broadening the Reach of Broadband 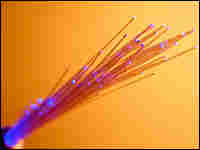 Fiber-optic cable can carry many times as much data as traditional copper wiring. iStock hide caption

Starting in the 1990s, telecommunications companies spent billions of dollars laying fiber-optic cable all over the country. That investment created an ultra-fast information superhighway, says Blair Levin, a media analyst at Stifel Nicolaus. But he says it's carrying only a fraction of the traffic it was built to handle.

Levin says there is still a gap at the most expensive part of the network: the last mile between the Internet and the consumer. He says those on-ramps have gotten better in the last decade, as cable and DSL modems have replaced slower dial-up connections. Now, a host of new technologies are promising to make those on-ramps even faster.

At Verizon, "We are fiber all the way from the network to the customer," says spokesman Eric Rabe. "The advantage that gives us is that as the explosion of data speeds and requirements takes place, we have the capacity to take that all the way to the customer."

Fiber-optic cable can carry many times as much data as traditional copper wiring. But it's expensive to deploy, and prone to costly delays. Verizon says it spent $1 billion last year alone building its FiOS network. With so much money involved, Wall Street investors are eager to see the payoff.

But Verizon's Rabe says that will come a few years down the road, as consumers demand bigger and bigger pipes to deliver their digital entertainment.

"As consumers use the Internet, they use video that requires more and more bandwidth. And we're now developing networks that are far faster than anything we've had in the past, because of that demand."

But there is concern among local governments that not everyone is going to be served by high-speed fiber-optic networks. Analyst Levin says local officials are worried that Verizon's FiOS and similar services will only be available in the most affluent neighborhoods.

"What the municipalities want is the ability to tell the phone companies that they have to build out to the entire area," Levin says. "The fear is on the part of the municipalities is that projects like FiOS, the way they're building it, they're only really building out to 50 percent of homes."

Levin says Wall Street is also wary of fiber-optic networks because they may wind up facing competition from emerging wireless technologies such as WIMAX, a wireless technology that promises to deliver broadband over great distances.

"If WIMAX technology -- a technology a lot of folks are talking actually works -- you can put an antenna on a tower downtown and the whole downtown is connected with very fast broadband," he says.

For now, WIMAX remains relatively untested in the wild. But a technology called Wi-Fi is already widely available. Wi-Fi uses a number of smaller antennas, called "nodes," to build a mesh network. Wi-Fi is slightly slower than cable or DSL, but its lower cost makes it popular with cities that want to offer affordable wireless service to their residents.

"The cities I've talked to don't believe there are enough choices," Cole Reinwand, a vice president at Earthlink, says. "Or that broadband availability is there yet. Reports suggest there's universal coverage available, but some of the poorer neighborhoods haven't been built out, DSL and cable are not available. "

Earthlink has signed a contract with Philadelphia to build the city's Wi-Fi network, and will join with Google to do the same in San Francisco.

Smaller towns are diving in, too. Paul Leonard is the manager of Upper Dublin Township, a suburb of Philadelphia, says he recently discovered through happenstance that there's a major fiber-optic cable running just yards from his office.

"We could conceivably run fiber down there, tap into that," he says, "And suddenly, our library which is downstairs, or the police station is on a network that's much, much more powerful than the little pipeline that we buy now from Verizon or Comcast. "

He says the township could potentially offer that fast wireless service to its citizens, too. Leonard says the United States once ranked fourth in the world in broadband penetration. Today it's fallen out of the top ten. Leonard says he'd like to see a national policy that promotes wider access. But he says even that won't let local leaders off the hook.

"Every community needs to have a technology plan. We're developing ours. Because if we don't, the kids in China or Brazil or Bangalore could eat our lunch."

Just as new wireless and fiber networks are beginning to compete with existing broadband offerings, another player may be poised to enter the U.S. market: satellite television. Blair Levin says DirecTV and Dish Network -- which already sell digital TV signals -- could soon offer broadband, too.

"The satellite guys don't want to be stuck just selling video," Levin says. "So they want to have a broadband offering so they can sell consumers a competitive product. "

That means satellite TV providers could join a growing list of companies and cities offering to carry data over the last mile to your front door.