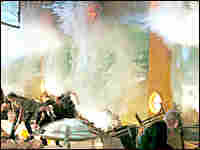 Water rushes in on the happy cruisers of Poseidon, a 2006 remake of the 1972 Irwin Allen produced smash movie The Poseidon Adventure. Warner Bros. Pictures hide caption

Unidentified Male #1: Now 15 Academy Award winners lead you through fire, through smoke, through rising water. Foot by foot, deck by deck, they climb to the bottom of the capsized ship. Twentieth Century Fox presents Irwin Allen's production of the Poseidon Adventure.

MONTAGNE: Producer Irwin Allen died in 1991. Commentator John Ridley takes a look back at the man who lives on as Hollywood's master of disaster.

(SOUNDBITE OF MOVIE 1972 "THE POSEIDON ADVENTURE")

GENE HACKMAN: (as Rev. Frank Scott) We're cut off from the rest of the world. They can't get to us maybe we can get to them.

MONTAGNE: Gene Hackman and others in Irwin Allen's 1972 film the Poseidon Adventure. Commentator John Ridley is a writer and director. His new graphic novel series is The American Way.

(SOUNDBITE OF SONG "THE MORNING AFTER")

MAUREEN MCGOVERN: (Singing) There's got to be a morning after, if we can hold on through the night. We have a chance to find the sunshine let's keep on lookin' for the light.