Accessibility links
The Lost Sounds of Old Beijing Beijing is tearing down many of its historic districts to make way for high-rise apartments and office towers. In the process, the sounds of the city's old neighborhoods are gradually falling silent.

Old Beijing was a city of unique sounds -- sounds used to mark time, to advertise goods and services, or just to tickle the ear. In the run-up to the 2008 Olympics, Beijing is tearing down many of its historic districts to make way for high-rise apartments and office towers. In the process, the sounds of the city's old neighborhoods are gradually falling silent. 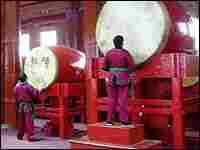 Retired chauffeur Yang Lizhong raises pigeons in a small alley near the Forbidden City. He ties small whistles made of gourds or bamboo to their tail feathers and opens their coop. The whistles and the pigeons are part of a pastime unique to leisurely Beijingers, somewhat like raising crickets or goldfish.

Zhang Zhenyuan once followed his father through Beijing's alleyways selling and fixing wooden barrels, learning the hawkers' cries of his and other trades. He now performs hawkers' cries as a folk art.

Zhang gives his rendition of Beijing's old town criers. The criers would use their noisemakers and voices to relay the time of day or night, as transmitted from the Drum and Bell towers. The criers warned residents to prevent fires at home.

Zhang imitates the sound of a roving stove repairman. Beijingers traditionally heated their homes with coal burned in cast iron stoves. The stove repairman signaled his arrival with a metal drum on a stick. When he swiveled the stick, two small balls on chains would strike the drum. "Repairs while you wait!" Zhang cries.

Zhang recollects the call of merchants selling "wan dou huang," a Beijing desert made from peas. "Portions so big you can't wrap them in your handkerchief!" Zhang shouts.

Yang explains that the whistles are made in pairs.

"One strikes a high note, the other a low note," he says. "Together, they produce a harmony like a group of musicians."

Sound carried a long way in old Beijing. The city used to be a maze of hutongs, or alleyways, lined with one-story houses. At dawn and dusk, the sound of huge drums would reverberate out from a tower near the city center. The sound brought order to the days of emperors and commoners alike.

At night, the time was marked by the deep sound of a 63-ton bronze bell, hanging in its own tower next to the drum tower. Today, the bell and drums are sounded mostly for tourists.

Before the advent of supermarkets and convenience stores, merchants roamed the hutongs, delivering goods and services to Beijingers' doorsteps. Each merchant had a distinctive noisemaker or hawker's cry to announce his arrival.

As a teenager, Zhang Zhenyuan followed his father through the alleys fixing wooden barrels. He learned the cries of his trade and those of other hawkers. He also collected noisemakers. Now he performs with them as a kind of folk art.

Zhang shows off two pairs of brass cups that fit inside each other. Merchants would use them to advertise sour plum juice, a favorite summertime drink.

Zhang, now 70, recalls the simpler times of his youth.

"We hawkers feel very nostalgic for the old days, when we were young," he says. "In those days, people were very honest. People didn't steal or rob. When I was little, we never locked our front doors."