Love Songs from a Bollywood Legend

One of the most-recorded artists in the world, Asha Bhosle's career began over 60 years ago in 1943. She has done playback singing for nearly every famous actress in close to 1,000 Bollywood movies, and has sung in many different languages including English, Russian and several sub-continent dialects. 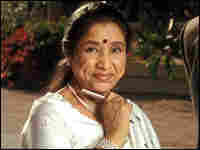 She has sung many different types of songs beyond film music, and is considered to be quite versatile. She has worked with Michael Stipe (of REM), Boy George, and most recently The Kronos Quartet, with whom she recorded the Grammy-winning You've Stolen My Heart.

Her latest album, Love Supreme (released in March 2006) is comprised of ghazals, a 10th-century Persian poetic form that translates to "speaking with women" in Arabic. This poetic form is popularly set to music in India and Pakistan.

Asha reinterprets several classic ghazals in various modern styles such as lounge, pop, jazz, and funk on Love Supreme. The album was released as a single disc in India, but for its North American release was expanded to two discs to include some of Asha's favorite duets.