Accessibility links
A Psychic Meltdown, Joined in Progress With each beautiful and jarring chord change, Paul Simon and unlikely collaborator Brian Eno evoke raging rivers metaphorical and literal. It's easy to imagine this song — one of his best — carrying on for hours, an index of torments natural and manmade.

A Psychic Meltdown, Joined in Progress

A Psychic Meltdown, Joined in Progress

Everything About It Is a Love Song

"Everything About It Is a Love Song" opens as a gentle pulsation, a little acoustic-guitar prayer squarely in the territory Paul Simon has wandered since Graceland. The first curveball arrives after a few lines of verse, when a brisk tempo kicks in and the spotlight lands on a rhythm pattern with the bustling, heavily processed energy of club music -- specifically drum-and-bass. 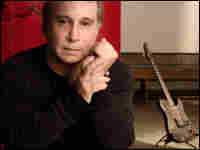 The loop, evidently masterminded by Simon's unlikely collaborator Brian Eno, sends sage-guy Simon into a new place. He'd been sharing a reasonable songwriterly thought about the struggle to join words and melody, and the new insistent rhythm triggers less guarded ideas on human failing ("We don't mean to mess things up / but mess them up we do") and agitated stream-of-consciousness commands ("Sit down, shut up, think about God / and wait for the hour of my rescue"). It's like the soundtrack to some psychic meltdown-in-progress, and with each beautiful and jarring chord change, Simon and Eno evoke raging rivers metaphorical and literal, all manner of random menace and futile response.

The placid mood eventually returns, but it's in that more frantic state that Simon is most riveting: It's easy to imagine this song -- one of his best -- carrying on for hours, an index of torments natural and manmade that rise up long enough to express something profoundly uncomfortable and then trail off, forever unresolved.