Accessibility links
The Beet Goes On Many still view beets as an old-world vegetable, dumped straight from the can onto Grandma's Sunday dinner table or served as borscht. But beneath the beet's unappealing hide is a versatile flesh that can be served hot or cold, pickled, roasted, deep fried, pulverized or eaten raw. 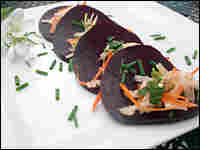 Roasted beets and jicama carrot salad, inspired by chef Jean-Georges Vongerichten. Scroll down for this recipe and others. Howard Yoon hide caption 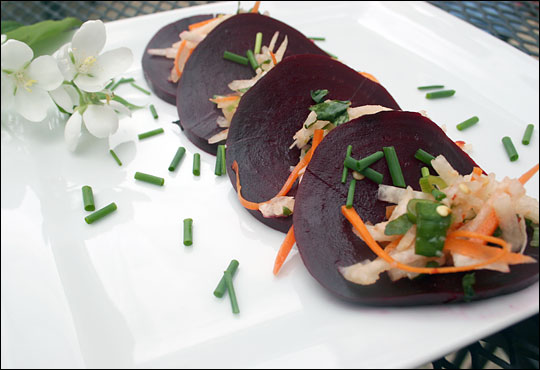 Roasted beets and jicama carrot salad, inspired by chef Jean-Georges Vongerichten. Scroll down for this recipe and others.

Walk into the produce section of any grocery store, and you'll likely see the same thing: Tucked away in the corner, far from the pyramids of shiny, waxy apples and beds of crispy green lettuce, is the land of misfit produce: the loose turnips, celeriac, beets and other root vegetables so misshapen they can't be stacked and so obscure they almost certainly have the cashier scratching his head for the right produce code.

Many of us still view beets as an old-world vegetable, dumped straight from the can onto Grandma's Sunday dinner table or served as borscht, a dish so popular with Russians that they packaged it for their cosmonauts to eat in space. More borscht in a tube, Comrade? No thanks.

Howard Yoon is the creative director of the Gail Ross Literary Agency in Washington, D.C. He has written and edited numerous nonfiction books.

Yet beets -- known around the world as beetroots -- are beginning to get some respect. Our apathy toward beets has been countered by the wild creative energy of innovative chefs. What they know that many of us don't is that beneath the beet's unappealing hide is a versatile flesh that can be served hot or cold, pickled, roasted, juiced, deep fried, pulverized or eaten raw.

At his New York restaurant WD-50, Wylie Dufresne drizzles a mixture of beet juice, black olives and xanthan gum over foie gras. At Jose Andres' six-seat Minibar in Washington, D.C., diners can order a red beet mojito, a refreshing minty concoction sweetened with the natural sugars of the beet while nibbling on "beet tumbleweed." This sweet-and-salty snack is made by flash-frying thin strands of raw beet string -- prepared with a Japanese rotating slicer called a Benriner -- which are then taken from the hot oil and quickly shaped by hand into a ball.

Don't be intimidated by beet preparation just because it's done at fancy restaurants. Beets may be ugly, their wispy taproot resembling the tip of a witch's nose, but they are the Rasputin of root vegetables -- incredibly hearty and nearly impossible to kill in the cooking process.

I find roasting to be the simplest way to prepare beets. If your beets come with the leafy greens attached, simply cut the stems an inch or two from the root (the leaves can also be prepared separately as you would Swiss chard). Then gently wash the roots and wrap them individually, skin on, in aluminum foil as you would a baked potato. Roast them in a 375-degree oven for an hour or so depending on their size -- more time if they're bigger, less if they're baby beets -- until a knife glides easily in and out through the foil wrapping.

Now the fun part: peeling. Using disposable kitchen gloves, take the beetroot out of the foil and rub a paper towel against the skin. If properly roasted, the skin will slide right off -- and you'll be left with a crimson jewel firm enough to hold up to slicing with a knife or mandoline, but soft enough to yield in your mouth.

If you love the earthy taste of beets, as I do, eat them simply with a generous drizzle of your best olive oil and a tiny pinch of sea salt. But beets' biggest strength may be how well they blend with other ingredients. They harmonize with other flavors into something familiar, something entirely new, like a new arrangement of your favorite song melody.

When paired with fruits such as oranges, the beet has enough natural sweetness to complement the orange's acidity (the acidity also preserves the beet-red color, which is why pickling is such a common method of preparation). But put a beet against a pungent fatty cheese, like Gorgonzola or Roquefort, and the root vegetable's deep woodsy tone plays contrapuntal to the cheese's sharp notes. The right pairing with beets performs in your mouth con amore.

The intense color of the beet adds depth to any dinner plating, but be warned: Beet dye will bleed into other food and even stain your hands a ghoulish purple color. Pulverized beets are regularly used as a coloring agent. They help retain the redness of tomato sauce in frozen pizzas, turn regular lemonade into "pink" lemonade and allow butchers to label cuts of beef.

Beets are nutritious (high in folates and vitamin C) and boast the highest natural sugar content of any vegetable. Their relative, the sugar beet, accounts for roughly 30 percent of sugar production in the world.

Beets are available year-round but are in their prime from about June until October. Now is the perfect time to head to your local grocery store and give these old-world misfits another try.

This is one of the snacks currently being served at Washington, D.C.,'s Minibar as part of a 30-course tasting menu. It comes from chef Katsuya Fukushima.

Peel beet and cut off ends. Slice into thin strings using Japanese Benriner cutter or pressing hard with a zester. Measure strings into 1/3-ounce portions, a little less than a tablespoon.

Place a single portion of string into hot oil for 8 seconds. Remove from oil, quickly place on towel to drain and salt liberally.

Within 5 seconds after leaving oil, work hot string between the palms of your hands until it hardens into a ball the size of a ping-pong. You may have to try several times to get the proper shape. Repeat process until you have used all the beet strings.

Serve as a snack or as a little bite before the meal begins.

If beets have stalks, trim stalks 1/2 inch from beet. Wash beets gently under water, then wrap individually in aluminum foil.

Roast beets for 1-2 hours depending on sizes. A knife should slide easily into the beet, through foil, when done. Allow to cool to room temperature.

While beets are roasting, put cream in a saucepan and bring to a boil. Lower heat and add blue cheese. Stir constantly until cheese has been fully incorporated into the cream.

Pour the cheese mixture into a food processor and blend until smooth. Season with salt and pepper to taste. Allow to cool to room temperature.

Melt butter over medium heat in small saucepan. Add walnuts, then spices and toss for 30 seconds. Allow to cool to room temperature.

Roast beets and peel according to recipe above. Allow beets to cool to room temperature.

In a medium bowl, combine jicama, carrot and green onion.

Mix ginger and vinegar in a separate bowl. Slowly whisk in vegetable oil until emulsified. Add salt and pepper to taste. Pour 2/3 of this mixture over the jicama and carrot mixture and toss gently. Refrigerate for at least 30 minutes.

When ready to serve, toss all ingredients again in their bowls. Plate beets first, then top with jicama carrot salad. Garnish with chives.