Accessibility links
Week 9: Weightlifting with Ms. Los Angeles Everybody has an ideal type of beauty. Some people like them thin or athletic or round. And some people like them big -- real big. I learn to incorporate weights into my workout with help from champion female bodybuilder Dianne Solomons. 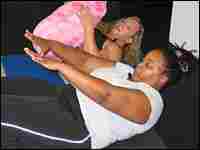 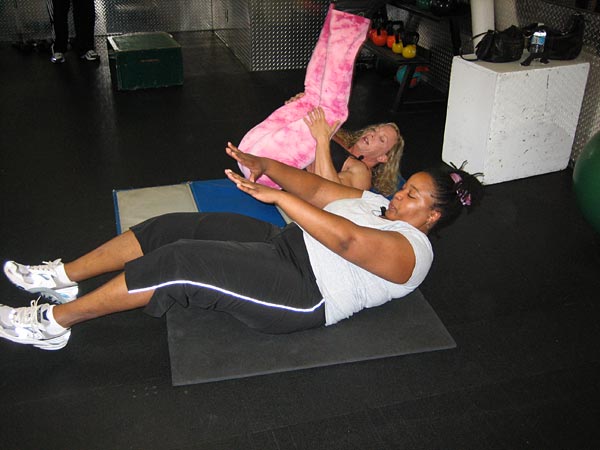 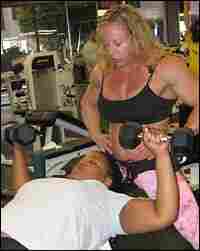 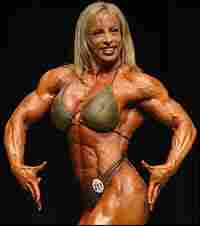 Dianne Solomons used to be a slender aerobics instructor, until she found some of her husband's bodybuilding magazines. She started training herself, and nine months later she won her very first bodybuilding contest.

Solomons is now a competitive bodybuilder and personal trainer. At 5'6" she's about my height, but built like tennis star Serena Williams, with arms and legs twice as big. Solomons currently holds the title of Ms. Los Angeles 2005 and remains the only person to win that bodybuilding title three times.

I journeyed to Gold's Gym in Redondo Beach, Calif., so Solomons can kick me into shape. We started with abdominal exercises. There's nothing I dread more than an ab workout -- except hearing how pained I sound while doing it.

Then it's on to the incline bench in the weight room. Solomons hands me two 12-pound weights, one for each hand. That's nothing compared with the guy next to me, who's doing the same workout with 40-pound dumbbells in each hand. I'll work up to that.

As I continued to work my upper body, I began to wonder why anyone who wasn't a bodybuilder would even want to do this. As it turns out, weightlifting is an excellent means of losing weight, as well as developing muscle tone.

By the time we completed our mini-workout, I was exhausted. Solomons assured me that this kind of routine would help me lose weight without building bulky muscle. I've already incorporated weights into my workout, and into my effort to get fit and stay there.