Accessibility links
Nigeria Rejects Term-Limit Change in Constitution Nigeria's Senate kills a proposed constitutional amendment that would have allowed the country's president to run for a third term. Critics said the proposal would widen regional, ethnic and religious rifts. They hailed its failure as a victory for democracy.

Nigeria's Senate kills a proposed constitutional amendment that would have allowed the country's president to run for a third term. Critics said the proposal would widen regional, ethnic and religious rifts. They hailed its failure as a victory for democracy. 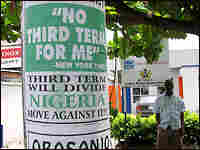 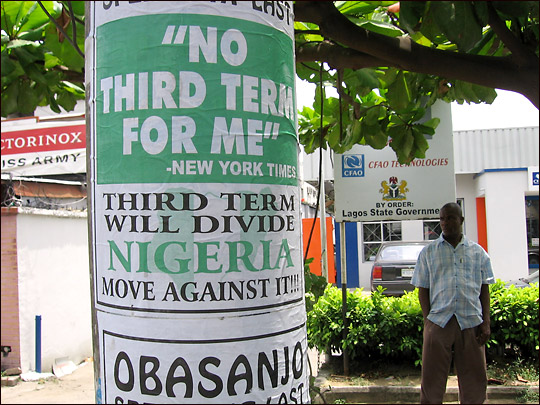 This poster mysteriously appeared on poles and walls in Nigeria's commercial capital, Lagos, in April. The third-term debate has been a highly divisive issue in Nigeria, Africa's top crude oil exporter and continent's most populous country.

In this part of the program, we go to Nigeria, where democracy has just gotten a boost, now that Nigeria's senate has refused to change the country's constitution - so that the president could stay in power, rather than step down at the end of his term. The question of extending the president's time in office has caused a bitter divide in Nigeria, which has never had a peaceful transition from one civilian government to the next.

There was jubilation on the floor and in the public gallery, with much back-slapping, dancing, and shouts of delight, after Nigerian senators voted resoundingly to reject the proposed constitutional amendment on a third presidential term.

The surprise decision by lawmakers, looked set to stop in its tracks, a long and determined campaign to allow President Olusegun Obasanjo a possible four-year extension of his leadership.

Mr. FESTUS OQUOYA (Constitutional Lawyer, Nigeria): Well, in practical terms, constitutionally and procedurally, it means that the whole concept of third terms for the president of the Federal Republic of Nigeria has come to an end because the entire senators, by unanimous voice vote, rejected the (unintelligible). So if the term did not pass through the second reading, it means that the bill is dead and is no longer in existence in the senate.

QUIST-ARCTON: The highly controversial and divisive third-term issue has dominated Nigerian politics for the past year. The battle pitted President Obasanjo's supporters against those who said extending term limits would be bad for democracy.

Among the fiercest third-term critics was Obasanjo's own Vice President, Atiku Abubakar. They argued that such a move could open the way for a return to corrupt dictatorship in Nigeria, a country that has lived under military rule for most of its 46 years since independence.

President Obasanjo has been touted as a strong campaigner against endemic graft, but now his administration is facing such accusations. Nigeria's anti-corruption agency is investigating allegations, denied by the government, that opposition lawmakers, including Uchay Ochenvucha(ph), were subjected to death threats, blackmail, and bribery to support the third-term bid.

Mr. UCHAY OCHENVUCHA (Nigerian lawmaker): Legislators are being offered money. They are being offered lots of land. I have been offered - somebody highly placed in government asked me to come and sign my endorsement for the support of the third-term project. And I would be adequately remunerated. I said, flat, no.

QUIST-ARCTON: The Obasanjo third-term campaigners argue that allowing the Nigerian leader to run for another four years in office, would give him the opportunity to cement wide-ranging liberal reforms the country needs. They said the defeat of the constitutional amendment bill in the senate, railroaded other fundamental proposals, including a rotating presidency between Nigeria's six regions, and a change in how the country's oil profits were shared out.