Web Extra: Hear Cole Introduce Some of the Guests Featured on 'The Nat King Cole Show' 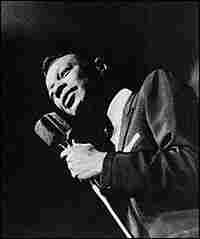 Nat "King" Cole performs to an audience in the 1950s. The singer and pianist struggled for a year to keep his pioneering variety show on the air, but corporate sponsorship proved elusive. Bettmann/CORBIS hide caption

Songs from the 'King'

The crooner's singing and television career is the subject of an American Masters documentary debuting on PBS Wednesday night. The show details how Cole reluctantly challenged segregation on television and in American society, but decide after a little more than one year later on the air to end the show for lack of a corporate sponsor.

The show featured some of the era's biggest stars sharing the stage with Cole, who was himself one of the top talents of his day. But television executives, wary of a backlash from an America still deeply divided along racial lines, took pains to put distance between Cole and his white female guests.