Accessibility links
A Trove of Stolen Treasure Looters in Italy dig up ancient treasures and sell them to the highest bidder. Some pieces make their way to the world's biggest museums. Author Peter Watson examines the network behind the trade.

Listen
A Trove of Stolen Treasure 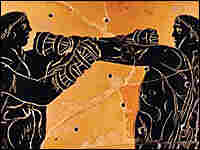 Detail from the cover of The Medici Conspiracy hide caption

Looters in Italy dig up ancient treasures and sell them to the highest bidder. Some pieces make their way to the world's biggest museums. Author Peter Watson's new book The Medici Conspiracy examines the network behind the trade.

Peter Watson, author of The Medici Conspiracy: The Illicit Journey of Looted Antiquities, from Italy's Tomb Raiders to the World's Greatest Museums

James Cuno, president and director of the Art Institute of Chicago 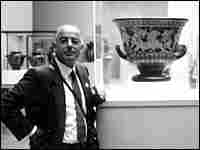 Giacomo Medici, photographed alongside the Euphronios krater in the Metropolitan Museum of Art in New York. This photograph was found during the police raid on his warehouse in Geneva Freeport. hide caption 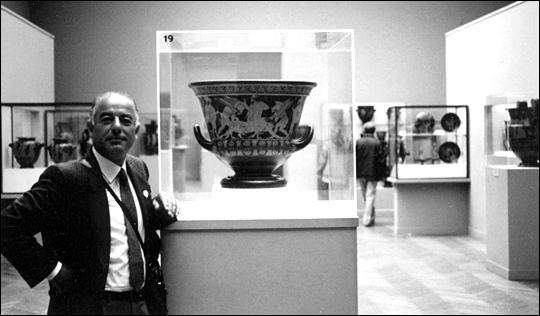 Giacomo Medici, photographed alongside the Euphronios krater in the Metropolitan Museum of Art in New York. This photograph was found during the police raid on his warehouse in Geneva Freeport. 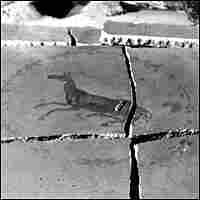 Fresco wall 7, showing the pieces cut into laptop-size fragments, reassembled and laid out on the restorer's trestle table in Zurich, Switzerland like a large jigsaw puzzle, prior to total restoration. The photo was found in Geneva. hide caption 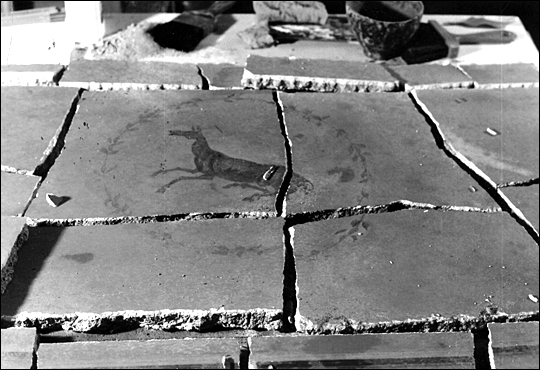 Fresco wall 7, showing the pieces cut into laptop-size fragments, reassembled and laid out on the restorer's trestle table in Zurich, Switzerland like a large jigsaw puzzle, prior to total restoration. The photo was found in Geneva. 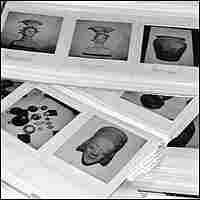 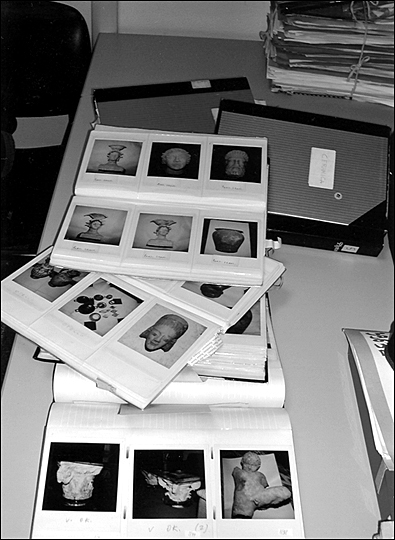 A 1995 raid on suspected tomb raider Giacomo Medici's warehouse in Geneva showed that Medici had been storing thousands of ancient vases, frescos, and other antiquities -- some in fragments or in various stages of restoration, some encrusted with dirt -- out of reach of the Italian government, in the Swiss Freeport. The Italian Carabinieri Art Squad gained access to the warehouse in 1997, as part of their investigation into Medici's ties to a global ring of looters, dealers, curators and collectors who worked to smuggle antiquities out of Italy. The documentation they found in Medici's warehouse proved to be as damning as the objects themselves.

Although the antiquities themselves formed the most vivid and moving aspect of the seizure in Geneva, there was no less interest -- for Conforti and for Ferri -- in the documentation found in the back office behind Medici's showroom. While the three archaeologists concentrated on the objects, the paperwork became the responsibility of Maurizio Pellegrini, a photographic and document expert who had one foot in the public prosecutor's office and the other in the Villa Giulia…

The Polaroids fell into distinct groups. First, there were photographs of objects that were encrusted with dirt or calcarious deposits, in which the antiquities were often broken and incomplete. In other words, these objects were photographed near where they were excavated, in nearby fields or farmyards, in the houses of tombaroli, even on the back of a truck in one case. Next, however, there were many Polaroids showing the same objects restored, with the fragments joined together. In many cases, although the fragments had been joined together, the joins of the fragments were still visible, as were the gaps (the lacunae) where parts of the vases, say, were still missing. In due course, Pellegrini pieced together why the objects had been photographed in this state -- but not at first.

Next came a series of photographs -- Polaroids again -- in which once more the same objects were depicted, but this time they had been fully restored, with the joins covered over and repainted and polished to look almost as good as new. In some cases, as Pellegrini worked through the documents, he found that many of these restored objects were also depicted in auction house catalogs or in museum publications. Finally, there was a most interesting set of photographs in which Medici, and sometimes others, were pictured alongside antiquities that were on display in particular museums. Over the months, Pellegrini was able to sift the photographs in such a way that, for dozens of objects, he could reconstruct an entire sequence: from objects just out of the ground, dirty and broken, to being restored, to being on display in the world's museums. Medici, it turned out, was a stickler for keeping records, and it was the photographs that provided Pellegrini with the first inkling of the totality of Medici's involvement. Many of the photographs had writing on them that directed him elsewhere in the documentation, and no less important, many showed interiors that he began to recognize as the investigation proceeded. This also helped him to piece together the complex web of interrelationships that would in time be fully exposed.

Pellegrini had to start somewhere, so he chose what was far and away the most immediately shocking set of photographs. This was a folder with, on the outside, the words " Pitture romana Via Bo.”….

" Mi é preso un colpo!” he breathed. " I was hit.” He couldn't believe his eyes, and he called out to the professors.

Zevi, the first to reach him, took the camera. " He was speechless,” says Pellegrini. " Scandalized.”

What the images revealed was a dismaying sequence -- " a real horror,” as he wrote in his report -- in which the first pictures showed three walls of what any expert could recognize as a Vesuvian/Pompeian villa. They could make this identification because the three walls were frescoed in what is called the Campanian II style. The decoration on Roman villas went through what art historians and archaeologists recognize as four styles, between the second century bc and ad 79. Campanian II comes second in this chronology, and decorations in that style differ from what came before and after in consisting of more panoramic landscapes, mythological scenes, and certain architectural features.

The photographs showed nine walls in all, but three were of particular interest. Two of them were in red, pale blue, and gray. These walls showed two female figures in the foreground with, below them, miniaturized masks and smaller figures. On the right wall was shown an architectural drawing of a two-story building, with a similar symmetric design opposite, on the left wall. In other words, in this first sequence of photographs, the room -- or one end of it -- is intact. " The frescoes are in an excellent state of conservation, both pictorially and structurally.” However, besides the walls of the room, the photographs also showed a mass of earth mixed with lapillae covering the floor and filling the space to a depth of a few feet; lapillae also encrust the ceiling area. Lapillae are a telltale sign to any Italian archaeologist. They are small balls of volcanic ash, formed after the eruption of Vesuvius in ad 79, which buried so much of the surrounding countryside south of Naples. This was further confirmation, in addition to the subject matter and pictorial style of the frescoes, that this room had been part of a villa that was one of those overwhelmed by the eruption of the famous volcano, but not one known to the official archaeologists. The first sequence of photographs therefore confirmed that this had been a very important discovery, made in a clandestine " excavation” by some tombaroli. It was the next set of photographs, however, that constituted the " horror.”

This second set showed the image of the central wall -- the one with the two female figures and the figurines -- but laid out like a giant jigsaw. The images had been cut from the original wall, in a number of highly irregular pieces, each in size about as big as a laptop, and then put back together again on panels that were framed -- edged -- in wood. The fresco had been taken off the villa wall, detached from its right and left companions, and cut up into chunks. That it was the same image was quite clear to Pellegrini, even though there were gaps between the separate pieces: The two females were clearly visible and recognizable. In his report, Pellegrini commented that this operation, normally highly technical (when done by archaeologists), was here done crudely and in a hurry, without any regard for the integrity or sanctity of the images but simply so that the fresco could be quickly and more easily smuggled abroad…

This, then, was the distressing starting point for Pellegrini. It revealed the scale of the traffic in illegally excavated antiquities, and the brutality shown by the tombaroli and those above them in respect to important and beautiful ancient objects, as well as the utter indifference to the archaeological importance of Italy's heritage, and it showed how inappropriate the word " excavation” is when applied to these activities.

"From the book The Medici Conspiracy: The Illicit Journey of Looted Antiquities from Italy’s Tomb Raiders to the World’s Greatest Museums by Peter Watson and Cecilia Todeschini. Copyright 2006. Reprinted with permission from PublicAffairs, a member of the Perseus Books Group. All rights reserved.” 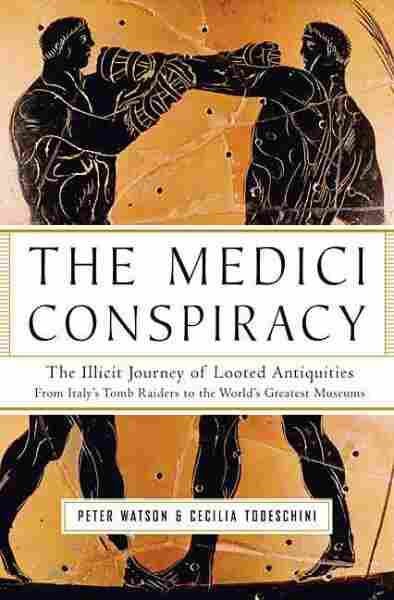 by Peter Watson and Cecelia Todeschini