Accessibility links
Safeguarding Privacy While Mining Data The government possesses powerful data-mining technology to find patterns that could help catch suspected terrorists. But it must use it in a way that doesn't hurt ordinary Americans, the head of a government advisory panel says.

The government possesses powerful data-mining technology to find patterns that could help catch suspected terrorists. But it must use it in a way that doesn't hurt ordinary Americans, the head of a government advisory panel says.

"The technology is very powerful and we've got to use it," says Newton Minow, who chaired the Technology and Privacy Advisory Committee, which issued its report in 2004. "The problem is we've got to use it in a way that does not harm every ordinary American."

The Technology and Privacy Advisory Committee, headed by Newton Minow, presented its final report, "Safeguarding Privacy in the Fight Against Terrorism," to Defense Secretary Rumsfeld in March 2004. 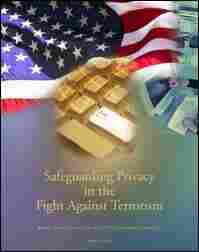 Department of Defense
Read the Report

The National Security Agency's domestic eavesdropping program and its collection of phone data is not the first time the government has tried to use data-mining technology. After the Sept. 11 attacks, the Pentagon began to set up a database of information about Americans' personal lives -- and find ways to search that data for patterns that could lead to terrorist activities.

Congress found out about the plan and shut it down.

Defense Secretary Donald Rumsfeld appointed a committee to investigate the use of data mining. Chairing that panel was Minow, who headed the Federal Communications Commission during the Kennedy administration.

"If you're dealing with American citizens, we think it's essential that you go to court to get a warrant," Minow says. "And the FISA [Foreign Intelligence Surveillance Act] court is set up to do that."

And, he said, any data-mining programs need "very close supervision" by a privacy officer and by Congress.

Minow says the 2004 TAPAC report, which was presented to the Bush administration and Congress, was largely ignored. He hopes the report will be looked at anew.

NSA Questioned on Scope of Domestic Spying Oct. 23, 2013
Lawyers Debate the Legality of Domestic Spying May 18, 2006
Phone Companies Gave NSA Millions of Call Records May 11, 2006
Democrat Calls for FCC Inquiry into NSA Phone Operations May 17, 2006
What Are the Implications of Data Mining? May 13, 2006
Tracking Patterns in Database of Millions of Calls May 11, 2006
Challenging, Defending the NSA May 17, 2006
Senate CIA Panel Prepares for Hayden Testimony May 18, 2006
Pentagon Scraps Plans for Terror Futures Market July 29, 2003