Accessibility links
Dust Storms Threaten Snow Packs The Colorado Rockies have been blasted by six dust storms since last December. That's the worst it's been in at least two decades. And dust doesn't just make the snow look bad. It makes the snow melt fast. 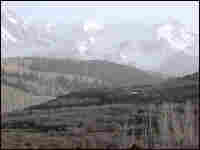 On a recent drive up into the Rockies, the view was partially obscured by a dust storm crossing the mountains. Richard Harris, NPR hide caption 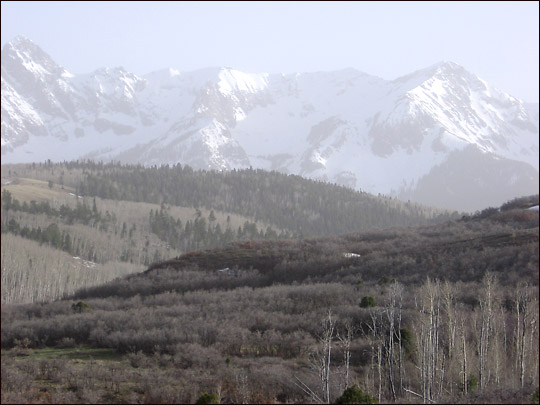 On a recent drive up into the Rockies, the view was partially obscured by a dust storm crossing the mountains. 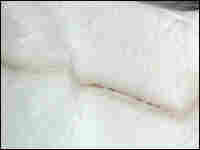 A faintly pink layer of dust is exposed in an excavated portion of the Rocky Mountain snow pack. Thomas Painter, NSIDC hide caption 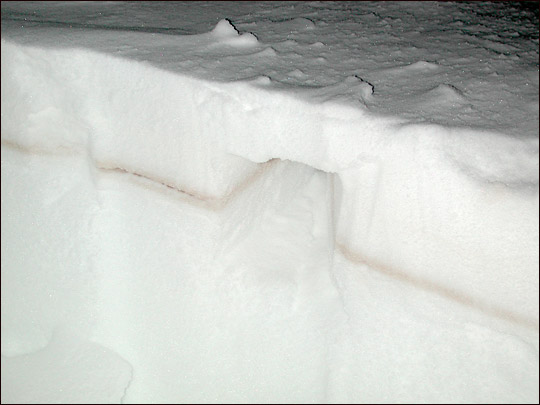 A faintly pink layer of dust is exposed in an excavated portion of the Rocky Mountain snow pack. 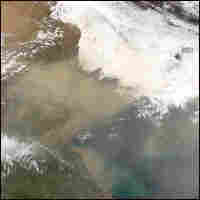 Thick dust sweeps east out of the border region between China and Mongolia on April 17, 2006. The storm blankets the coast as it moves out over the Yellow Sea toward Korea. Dust from storms like this can make its way as far as the United States. Jesse Allen/NASA/Earth Observatory hide caption 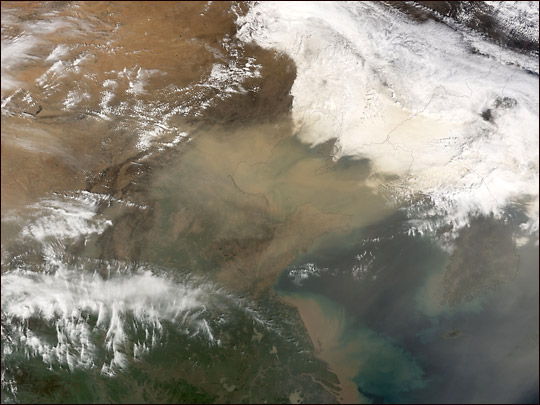 Thick dust sweeps east out of the border region between China and Mongolia on April 17, 2006. The storm blankets the coast as it moves out over the Yellow Sea toward Korea. Dust from storms like this can make its way as far as the United States. 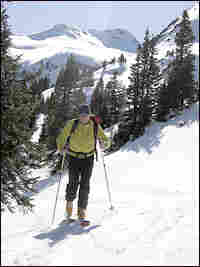 Scientist Thomas Painter of the National Snow and Ice Data Center in Boulder, Colo., sets off into the mountains to collect data on dust in the snow pack. Richard Harris, NPR hide caption 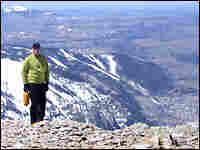 The town of Telluride, Colo., stretches out beneath Painter as he stands atop a 13,500-foot peak. Beyond the town is the Colorado Plateau, the source of most of the dust that lands in the Rockies. Richard Harris, NPR hide caption 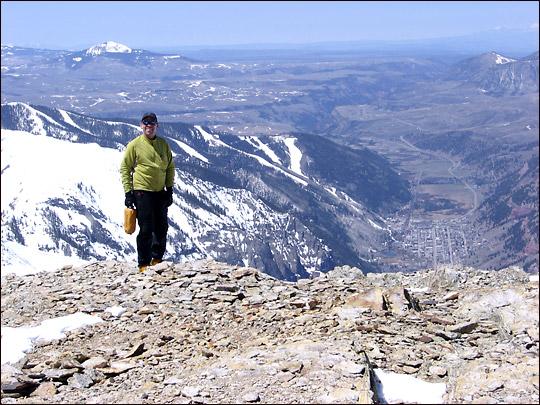 The town of Telluride, Colo., stretches out beneath Painter as he stands atop a 13,500-foot peak. Beyond the town is the Colorado Plateau, the source of most of the dust that lands in the Rockies.

The Colorado Rockies have been blasted by six dust storms since last December. That's the worst it has been in at least two decades. And dust doesn't just make the snow look bad. It makes the snow melt faster. That can spell trouble for farmers, power companies and others who rely on the water from the melting snow.

Scientist Thomas Painter recently set out to investigate the dusty snow. But, as he drove over a mountain pass, the blue sky wasn't quite blue enough for Painter's trained eye. He suspected we were driving through the sixth high-altitude dust storm of the year.

"Now this will be exciting. It will be the first one that I've seen. I've always seen the remnants of them, but I never see them happen," Painter said.

Follow USGS ecologist Jayne Belnap into the Utah desert for a look at dust sources, and solutions.

Painter continued to crane his neck as he studied the sky. He says this dust might have blown all the way from China. He was dying to get up to the snow so he could sample it, study it and worry about it. As we wound into the San Juan mountains in southwestern Colorado, the dust became more apparent.

"Whoa! This is very pink snow for this early," Painter exclaimed.

Not Cat-in-the-Hat pink, but clearly not white, either, the way the snow usually is in the middle of spring.

The next day, Tom Painter drove up Red Mountain Pass and strapped on mountaineering skis to get a closer look.

The Dangers of Dark Snow

Dust is a big deal. It makes the snow darker. And dark snow melts fast. Too fast. In fact, it has a much bigger effect on the snow than even global warming, Painter says.

"When the snow melts ... it comes out of the mountains [and] translates into billions of dollars in agriculture, hydroelectric and recreation," Painter said.

Reservoirs overflow if they get too much water early in the season, and then run low later in the summer. And white-water guides depend on a flow of water through the summer -- that is jeopardized if dust makes the snow melt early in one huge rush.

Likewise, skiers like Painter find it unsettling, at the very least.

"It's hard to properly wax for dust!" Painter said.

But scientists know surprisingly little about the effect of natural dust falls on snow. Painter says he only knows of one other team anywhere in the world studying it. So he can't reach back to previous research to predict how badly water resources will be thrown off-kilter by this year's dust storms. The subject may be neglected, in part, because it's usually not obvious that dust is darkening the surface of snow.

"The first couple of years that we were doing this, I kept taking my sunglasses off to get the sunscreen off them," Painter said. "And there wasn't any sunscreen on them. And I'd kick the snow, and it was like ripping down the wall between the black and white and the color part of the Wizard of Oz. All of a sudden, the brilliant white and the little sparkles of blue and red would come back."

Science Born of a Ski Trip

Painter says he became captivated by dust after a ski trip with his dad, back when he was in graduate school. One morning, he scraped dust off a square of snow to expose a brilliant white surface underneath. When they came back at the end of the day, that white patch was no longer a dip, but actually the top of a column standing up from the surface.

"It didn't melt away as quickly. And everything else was melting away dramatically that day," Painter said. "So my father started drilling me with questions. 'Where did the dust come from? How often does the dust come? Why does it accumulate at the surface?' And I realized I didn't know the answers to any of these questions."

That was the beginning of a scientific quest.

"It turns out it's a much bigger issue than I had even thought," Painter said.

Tracing the Travels of Dust

Nine scientists and technicians traveled with Painter for this trip into the wilderness. Most, like Painter, are affiliated with the National Snow and Ice Data Center at the University of Colorado. Collaborator Chris Landry is from the tiny Center for Snow and Avalanche Studies in nearby Silverton. As we came upon him, he was carefully cutting a square out of the snow -- with an old-fashioned carpenter's saw.

"We're doing here a so-called bulk sample of snow with dust in it," Landry said. "This is the dust that fell last night while you were driving in."

Particles from this square of snow will be tested back in the lab so that Painter can find out where they came from -- Mongolia, the Mojave desert, or Monument Valley, Ariz., on the Colorado Plateau.

But where it comes from is just part of the puzzle. The more pressing question is what it will do to the snow: How fast it will make it melt? To find out, they've dug a big pit through more than eight feet of dense snow to look at dust layers from the five previous storms.

Snow samples from here tell them the snow is already very close to its melting point -- and some layers are already laden with water. That means the snow pack isn't likely to stick around long this season. Ultimately, the scientists want to be able to predict how a given amount of dust will affect the snowmelt, so they can tell water managers down the Colorado and the Rio Grande rivers what to expect in future years.

Painter ran one experiment at the pit. But he was anxious to press on toward the basin's high point, a rocky outcropping at 13,500 feet. He promised it would be worth the effort.

Finally, we reach the top.

"Pretty amazing, huh?" he asked as we look out on the scene.

Far below us, on the other side of the mountain, we can see the town of Telluride. Stretching out into the distance is the Colorado Plateau. That's the source of most of the dust that hits the Rockies. The occasional dust storm from China is a reminder, though, that this is a global problem. Dust blows around the world, and it falls on snow all around the world.

"The Alps receive dust from the Sahara and the Taklamakan in western China, and the Gobi deposits dust into the mountain ranges in northwest China and Mongolia," Painter said.

Arizona, Utah, Mongolia and the Sahara all generate dust for similar reasons: Human activities are disrupting the natural barrier that usually keeps dirt on the ground. Painter says that human disruption is only getting worse.

Someday, Painter wants to tackle the global question of dust. But he says for now, it's exciting to take on the scientific challenge in his own backyard. But it's also worrying on a personal level.

"As a participant in society it's a bit troubling, wondering, with my son coming into the world, whether in 15 years I'm going to tell him what snow used to look like."

That depends, at least in part, on how the lands far below this mountain peak are treated, by the human beings who stir up the dust in the first place.