Accessibility links
Paper Defends Story on NSA Phone Program A week ago, USA Today reported that the National Security Agency had been secretly collecting the phone-call records of tens of millions of Americans using data provided by three major phone companies. Other newspapers soon confirmed the NSA had built up the database. But a few days later, the phone companies started issuing denials -- denials that have gaps of their own. Now some readers want to know whether USA Today still stands by its story. 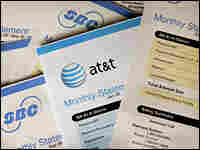 Verizon and BellSouth have issued statements denying USA Today's report that they provided the NSA with records of their customers’ calls. Scott Olson/Getty Images hide caption

USA Today disclosed last week that the National Security Agency had been secretly collecting the phone records of tens of millions of Americans with the help of major phone companies.

It was a big scoop. Other newspapers -- including The New York Times and The Washington Post -- soon confirmed that the NSA had created the database.

But two of the three key telephone companies cited by USA Today later started issuing denials they had been involved -- and on that part of its story, USA Today felt very much alone.

In his first comments on the issue, USA Today Editor-in-Chief Ken Paulson tells NPR the paper has painstakingly double-checked its story since Bell South and Verizon raised objections.

"Our sources have told us they think we got it right -- they know we've got it right," Paulson says. "And they reiterated that what they told us is what showed up in the newspaper."

USA Today's scoop dominated the news for days. At a press conference on Tuesday, President Bush was asked whether, in the wake of the revelations about the NSA database, Americans should feel that their privacy had been invaded.

"We got accused of not connecting dots prior to September the 11th, and we're going to connect dots to protect the American people, within the law," Mr. Bush said. "The program he’s asking about is one that has been fully briefed to members of the United States Congress, in both political parties. They are very aware of what is taking place."

The new White House press secretary, Tony Snow, denied the president's remarks amounted to a confirmation of the existence of the NSA program described by USA Today. But other newspapers soon did it for him.

"That story has been out there for more than a week and no one has refuted the core reporting of USA Today -- that there is in fact a database that keeps track of American phone calls in some form," says USA Today's Paulson.

In its article, USA Today reported that AT&T, BellSouth and Verizon had provided data to the government -- and had even been offered money by the NSA to do so. But after its publication, Verizon issued a statement saying it had never provided any information about the domestic phone calls of its customers.

And today, BellSouth demanded a retraction from USA Today for portions of the article, saying the company never turned over tens of millions of phone records to the NSA and that it had no contracts with the NSA to do so.

USA Today's Paulson tells NPR that the paper will examine the complaints seriously, but he says that the companies refused any meaningful comment before the story was printed.

"We were surprised because we had been talking to both companies for literally weeks," Paulson says. "They knew this story was being written. They knew what we were going to say. And frankly, they took some time in deciding how to craft a response."

BellSouth spokesman Jeff Battcher says it took days for the company to review the claims made in the story -- and that USA Today didn't spell out what it was going to publish in the article until the day before it appeared.

The newspaper's reporter on the story, Leslie Cauley, is well versed in the telecommunications beat and has written a book on AT&T. Her article relied on unnamed sources said to be closely familiar with the creation of the database. USA Today has tight policies discouraging the use of anonymous sources, but a senior editor reviewed each unnamed source carefully before publication.

During Carl Bernstein and Bob Woodward's coverage of the Watergate scandal, The Washington Post was often challenged on its initial stories and often alone on its scoops. Barry Sussman was the editor at the Post who oversaw them and he says the best defense when confronted is to do more reporting.

"What you have to do is affirm that you went about it correctly -- that you did the reporting as well as you can do it -- and that you see if there’s further reporting to be done," Sussman says.

Several USA Today staffers spoke to NPR on condition of anonymity because they aren't authorized to talk about the story. They say the phone companies' denials have caused some anxiety inside the newsroom. But Paulson says he doesn't sense the anxiety, just the desire to do watchdog reporting.

The stakes may prove high for the telephone companies --- some consumers have filed lawsuits against major phone firms saying their privacy has been compromised.

And some journalists say the phone companies' denials seem hedged. Verizon, for example, added most of its long distance customers after it concluded its acquisition of MCI. Its denial did not extend to the records of phone calls made by former MCI customers.

As Barry Sussman and other journalists suggested today, being alone can be lonely -- or it can mean you're well ahead of the pack.